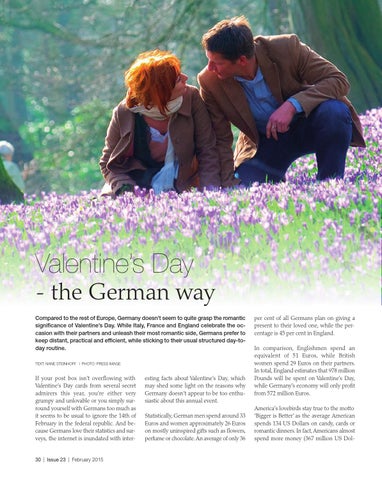 Valentine’s Day - the German way Compared to the rest of Europe, Germany doesn’t seem to quite grasp the romantic significance of Valentine’s Day. While Italy, France and England celebrate the occasion with their partners and unleash their most romantic side, Germans prefer to keep distant, practical and efficient, while sticking to their usual structured day-today routine. TEXT: NANE STEINHOFF | PHOTO: PRESS IMAGE

If your post box isn’t overflowing with Valentine’s Day cards from several secret admirers this year, you’re either very grumpy and unlovable or you simply surround yourself with Germans too much as it seems to be usual to ignore the 14th of February in the federal republic. And because Germans love their statistics and surveys, the internet is inundated with inter-

esting facts about Valentine’s Day, which may shed some light on the reasons why Germany doesn't appear to be too enthusiastic about this annual event. Statistically, German men spend around 33 Euros and women approximately 26 Euros on mostly uninspired gifts such as flowers, perfume or chocolate. An average of only 36

per cent of all Germans plan on giving a present to their loved one, while the percentage is 45 per cent in England. In comparison, Englishmen spend an equivalent of 51 Euros, while British women spend 29 Euros on their partners. In total, England estimates that 978 million Pounds will be spent on Valentine’s Day, while Germany’s economy will only profit from 572 million Euros. America’s lovebirds stay true to the motto ‘Bigger is Better’ as the average American spends 134 US Dollars on candy, cards or romantic dinners. In fact, Americans almost spend more money (367 million US Dol-