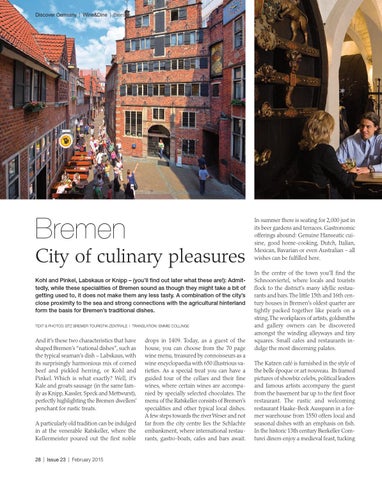 Bremen City of culinary pleasures Kohl and Pinkel, Labskaus or Knipp – (you’ll find out later what these are!): Admittedly, while these specialities of Bremen sound as though they might take a bit of getting used to, it does not make them any less tasty. A combination of the city’s close proximity to the sea and strong connections with the agricultural hinterland form the basis for Bremen’s traditional dishes. TEXT & PHOTOS: BTZ BREMER TOURISTIK-ZENTRALE | TRANSLATION: EMMIE COLLINGE

And it’s these two characteristics that have shaped Bremen’s “national dishes”, such as the typical seaman’s dish – Labskaus, with its surprisingly harmonious mix of corned beef and pickled herring, or Kohl and Pinkel. Which is what exactly? Well, it’s Kale and groats sausage (in the same family as Knipp, Kassler, Speck and Mettwurst), perfectly highlighting the Bremen dwellers’ penchant for rustic treats. A particularly old tradition can be indulged in at the venerable Ratskeller, where the Kellermeister poured out the first noble

drops in 1409. Today, as a guest of the house, you can choose from the 70 page wine menu, treasured by connoisseurs as a wine encyclopaedia with 650 illustrious varieties. As a special treat you can have a guided tour of the cellars and their fine wines, where certain wines are accompanied by specially selected chocolates. The menu of the Ratskeller consists of Bremen’s specialities and other typical local dishes. A few steps towards the river Weser and not far from the city centre lies the Schlachte embankment, where international restaurants, gastro-boats, cafes and bars await.

In summer there is seating for 2,000 just in its beer gardens and terraces. Gastronomic offerings abound: Genuine Hanseatic cuisine, good home-cooking, Dutch, Italian, Mexican, Bavarian or even Australian – all wishes can be fulfilled here. In the centre of the town you’ll find the Schnoorviertel, where locals and tourists flock to the district’s many idyllic restaurants and bars.The little 15th and 16th century houses in Bremen’s oldest quarter are tightly packed together like pearls on a string.The workplaces of artists, goldsmiths and gallery owners can be discovered amongst the winding alleyways and tiny squares. Small cafes and restaurants indulge the most discerning palates. The Katzen café is furnished in the style of the belle époque or art nouveau. Its framed pictures of showbiz celebs, political leaders and famous artists accompany the guest from the basement bar up to the first floor restaurant. The rustic and welcoming restaurant Haake-Beck Ausspann in a former warehouse from 1550 offers local and seasonal dishes with an emphasis on fish. In the historic 13th century Bierkeller Comturei diners enjoy a medieval feast, tucking