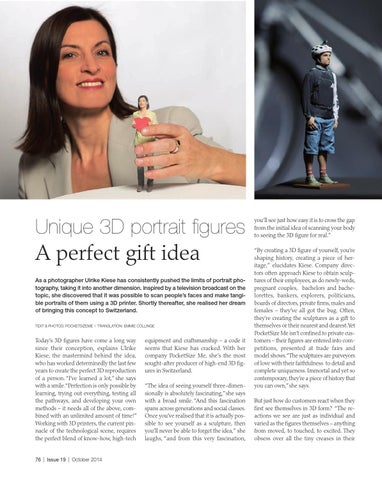 A perfect gift idea As a photographer Ulrike Kiese has consistently pushed the limits of portrait photography, taking it into another dimension. Inspired by a television broadcast on the topic, she discovered that it was possible to scan people’s faces and make tangible portraits of them using a 3D printer. Shortly thereafter, she realised her dream of bringing this concept to Switzerland. TEXT & PHOTOS: POCKETSIZEME | TRANSLATION: EMMIE COLLINGE

Today’s 3D figures have come a long way since their conception, explains Ulrike Kiese, the mastermind behind the idea, who has worked determinedly the last few years to create the perfect 3D reproduction of a person. “I’ve learned a lot,” she says with a smile.“Perfection is only possible by learning, trying out everything, testing all the pathways, and developing your own methods – it needs all of the above, combined with an unlimited amount of time!” Working with 3D printers, the current pinnacle of the technological scene, requires the perfect blend of know-how, high-tech

equipment and craftsmanship – a code it seems that Kiese has cracked. With her company PocketSize Me, she’s the most sought-after producer of high-end 3D figures in Switzerland. “The idea of seeing yourself three-dimensionally is absolutely fascinating,”she says with a broad smile. “And this fascination spans across generations and social classes. Once you’ve realised that it is actually possible to see yourself as a sculpture, then you’ll never be able to forget the idea,” she laughs, “and from this very fascination,

you’ll see just how easy it is to cross the gap from the initial idea of scanning your body to seeing the 3D figure for real.” “By creating a 3D figure of yourself, you’re shaping history, creating a piece of heritage,” elucidates Kiese. Company directors often approach Kiese to obtain sculptures of their employees, as do newly-weds, pregnant couples, bachelors and bachelorettes, bankers, explorers, politicians, boards of directors, private firms, males and females – they’ve all got the bug. Often, they’re creating the sculptures as a gift to themselves or their nearest and dearest.Yet PocketSize Me isn’t confined to private customers – their figures are entered into competitions, presented at trade fairs and model shows.“The sculptures are purveyors of love with their faithfulness to detail and complete uniqueness. Immortal and yet so contemporary, they’re a piece of history that you can own,”she says. But just how do customers react when they first see themselves in 3D form? “The reactions we see are just as individual and varied as the figures themselves – anything from moved, to touched, to excited. They obsess over all the tiny creases in their