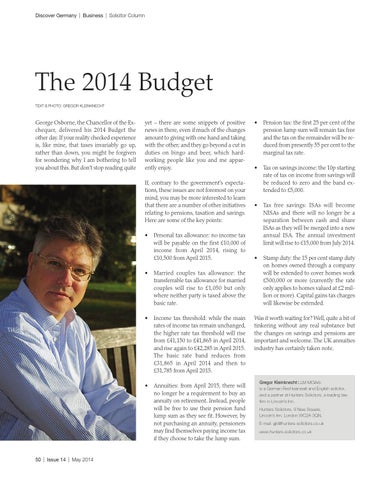 George Osborne, the Chancellor of the Exchequer, delivered his 2014 Budget the other day. If your reality checked experience is, like mine, that taxes invariably go up, rather than down, you might be forgiven for wondering why I am bothering to tell you about this. But don’t stop reading quite

yet – there are some snippets of positive news in there, even if much of the changes amount to giving with one hand and taking with the other; and they go beyond a cut in duties on bingo and beer, which hardworking people like you and me apparently enjoy. If, contrary to the government’s expectations, these issues are not foremost on your mind, you may be more interested to learn that there are a number of other initiatives relating to pensions, taxation and savings. Here are some of the key points: •

Annuities: from April 2015, there will no longer be a requirement to buy an annuity on retirement. Instead, people will be free to use their pension fund lump sum as they see fit. However, by not purchasing an annuity, pensioners may find themselves paying income tax if they choose to take the lump sum.

Pension tax: the first 25 per cent of the pension lump sum will remain tax free and the tax on the remainder will be reduced from presently 55 per cent to the marginal tax rate.

Tax on savings income: the 10p starting rate of tax on income from savings will be reduced to zero and the band extended to £5,000.

Tax free savings: ISAs will become NISAs and there will no longer be a separation between cash and share ISAs as they will be merged into a new annual ISA. The annual investment limit will rise to £15,000 from July 2014.

Stamp duty: the 15 per cent stamp duty on homes owned through a company will be extended to cover homes work £500,000 or more (currently the rate only applies to homes valued at £2 million or more). Capital gains tax charges will likewise be extended.

Was it worth waiting for? Well, quite a bit of tinkering without any real substance but the changes on savings and pensions are important and welcome. The UK annuities industry has certainly taken note.