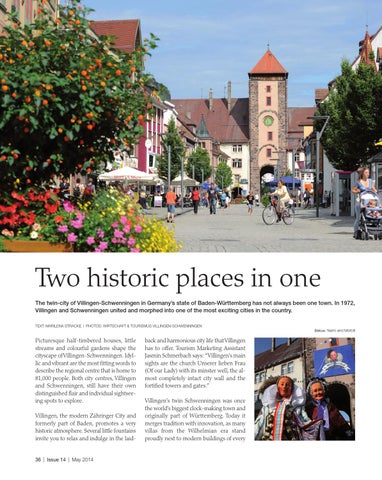 Two historic places in one The twin-city of Villingen-Schwenningen in Germany’s state of Baden-Württemberg has not always been one town. In 1972, Villingen and Schwenningen united and morphed into one of the most exciting cities in the country. TEXT: MARILENA STRACKE | PHOTOS: WIRTSCHAFT &amp; TOURISMUS VILLINGEN-SCHWENNINGEN Below: Narro and Morbili

Picturesque half-timbered houses, little streams and colourful gardens shape the cityscape ofVillingen-Schwenningen. Idyllic and vibrant are the most fitting words to describe the regional centre that is home to 81,000 people. Both city centres, Villingen and Schwenningen, still have their own distinguished flair and individual sightseeing spots to explore. Villingen, the modern Zähringer City and formerly part of Baden, promotes a very historic atmosphere. Several little fountains invite you to relax and indulge in the laid-

back and harmonious city life thatVillingen has to offer. Tourism Marketing Assistant Jasmin Schmerbach says: “Villingen’s main sights are the church Unserer lieben Frau (Of our Lady) with its minster well, the almost completely intact city wall and the fortified towers and gates.” Villingen’s twin Schwenningen was once the world’s biggest clock-making town and originally part of Württemberg. Today it merges tradition with innovation, as many villas from the Wilhelmian era stand proudly next to modern buildings of every