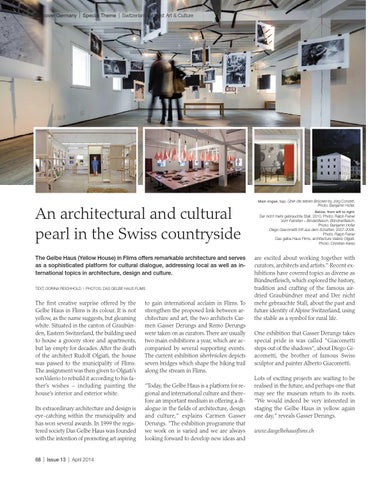 The first creative surprise offered by the Gelbe Haus in Flims is its colour. It is not yellow, as the name suggests, but gleaming white. Situated in the canton of Graubünden, Eastern Switzerland, the building used to house a grocery store and apartments, but lay empty for decades. After the death of the architect Rudolf Olgiati, the house was passed to the municipality of Flims. The assignment was then given to Olgiati’s sonValerio to rebuild it according to his father’s wishes – including painting the house’s interior and exterior white. Its extraordinary architecture and design is eye-catching within the municipality and has won several awards. In 1999 the registered society Das Gelbe Haus was founded with the intention of promoting art aspiring

to gain international acclaim in Flims. To strengthen the proposed link between architecture and art, the two architects Carmen Gasser Derungs and Remo Derungs were taken on as curators.There are usually two main exhibitions a year, which are accompanied by several supporting events. The current exhibition überbrücken depicts seven bridges which shape the hiking trail along the stream in Flims. &quot;Today, the Gelbe Haus is a platform for regional and international culture and therefore an important medium in offering a dialogue in the fields of architecture, design and culture,&quot; explains Carmen Gasser Derungs. &quot;The exhibition programme that we work on is varied and we are always looking forward to develop new ideas and

are excited about working together with curators, architects and artists.&quot; Recent exhibitions have covered topics as diverse as Bündnerfleisch, which explored the history, tradition and crafting of the famous airdried Graubündner meat and Der nicht mehr gebrauchte Stall, about the past and future identity of Alpine Switzerland, using the stable as a symbol for rural life. One exhibition that Gasser Derungs takes special pride in was called &quot;Giacometti steps out of the shadows&quot;, about Diego Giacometti, the brother of famous Swiss sculptor and painter Alberto Giacometti. Lots of exciting projects are waiting to be realised in the future, and perhaps one that may see the museum return to its roots. &quot;We would indeed be very interested in staging the Gelbe Haus in yellow again one day,&quot; reveals Gasser Derungs. www.dasgelbehausflims.ch