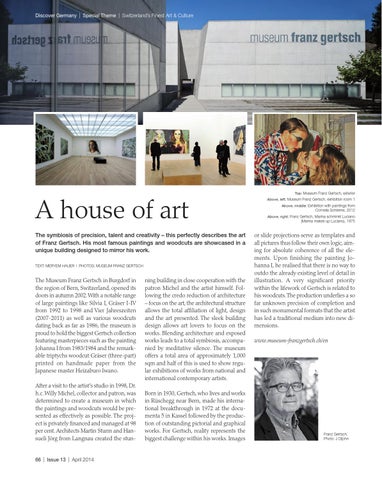 A house of art The symbiosis of precision, talent and creativity – this perfectly describes the art of Franz Gertsch. His most famous paintings and woodcuts are showcased in a unique building designed to mirror his work. TEXT: MERYEM HAUER | PHOTOS: MUSEUM FRANZ GERTSCH

The Museum Franz Gertsch in Burgdorf in the region of Bern, Switzerland, opened its doors in autumn 2002. With a notable range of large paintings like Silvia I, Gräser I-IV from 1992 to 1998 and Vier Jahreszeiten (2007-2011) as well as various woodcuts dating back as far as 1986, the museum is proud to hold the biggest Gertsch collection featuring masterpieces such as the painting Johanna I from 1983/1984 and the remarkable triptychs woodcut Gräser (three-part) printed on handmade paper from the Japanese master Heizaburo Iwano. After a visit to the artist’s studio in 1998, Dr. h.c. Willy Michel, collector and patron, was determined to create a museum in which the paintings and woodcuts would be presented as effectively as possible. The project is privately financed and managed at 98 per cent. Architects Martin Sturm and Hansueli Jörg from Langnau created the stun-

ning building in close cooperation with the patron Michel and the artist himself. Following the credo reduction of architecture – focus on the art, the architectural structure allows the total affiliation of light, design and the art presented. The sleek building design allows art lovers to focus on the works. Blending architecture and exposed works leads to a total symbiosis, accompanied by meditative silence. The museum offers a total area of approximately 1,000 sqm and half of this is used to show regular exhibitions of works from national and international contemporary artists. Born in 1930, Gertsch, who lives and works in Rüschegg near Bern, made his international breakthrough in 1972 at the documenta 5 in Kassel followed by the production of outstanding pictorial and graphical works. For Gertsch, reality represents the biggest challenge within his works. Images

or slide projections serve as templates and all pictures thus follow their own logic, aiming for absolute coherence of all the elements. Upon finishing the painting Johanna I, he realised that there is no way to outdo the already existing level of detail in illustration. A very significant priority within the lifework of Gertsch is related to his woodcuts.The production underlies a so far unknown precision of completion and in such monumental formats that the artist has led a traditional medium into new dimensions. www.museum-franzgertsch.ch/en