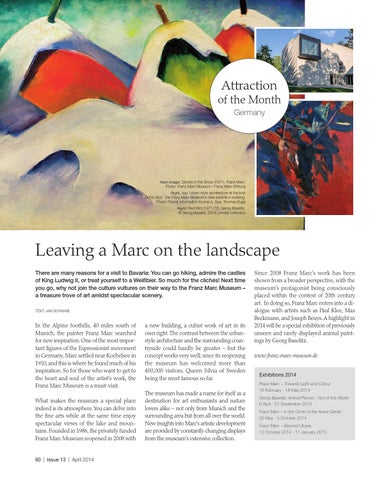 Leaving a Marc on the landscape There are many reasons for a visit to Bavaria: You can go hiking, admire the castles of King Ludwig II, or treat yourself to a Weißbier. So much for the clichés! Next time you go, why not join the culture vultures on their way to the Franz Marc Museum – a treasure trove of art amidst spectacular scenery. TEXT: JAN SCHWAB

In the Alpine foothills, 40 miles south of Munich, the painter Franz Marc searched for new inspiration. One of the most important figures of the Expressionist movement in Germany, Marc settled near Kochelsee in 1910, and this is where he found much of his inspiration. So for those who want to get to the heart and soul of the artist’s work, the Franz Marc Museum is a must-visit. What makes the museum a special place indeed is its atmosphere.You can delve into the fine arts while at the same time enjoy spectacular views of the lake and mountains. Founded in 1986, the privately funded Franz Marc Museum reopened in 2008 with

a new building, a cubist work of art in its own right.The contrast between the urbanstyle architecture and the surrounding countryside could hardly be greater – but the concept works very well; since its reopening the museum has welcomed more than 400,000 visitors, Queen Silvia of Sweden being the most famous so far. The museum has made a name for itself as a destination for art enthusiasts and nature lovers alike – not only from Munich and the surrounding area but from all over the world. New insights into Marc’s artistic development are provided by constantly changing displays from the museum’s extensive collection.

Since 2008 Franz Marc’s work has been shown from a broader perspective, with the museum’s protagonist being consciously placed within the context of 20th century art. In doing so, Franz Marc enters into a dialogue with artists such as Paul Klee, Max Beckmann, and Joseph Beuys. A highlight in 2014 will be a special exhibition of previously unseen and rarely displayed animal paintings by Georg Baselitz. www.franz-marc-museum.de