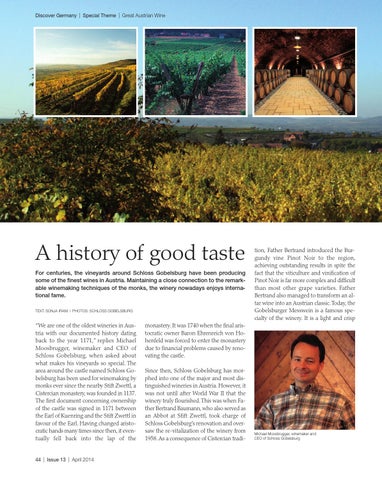 A history of good taste For centuries, the vineyards around Schloss Gobelsburg have been producing some of the finest wines in Austria. Maintaining a close connection to the remarkable winemaking techniques of the monks, the winery nowadays enjoys international fame. TEXT: SONJA IRANI | PHOTOS: SCHLOSS GOBELSBURG

“We are one of the oldest wineries in Austria with our documented history dating back to the year 1171,” replies Michael Moosbrugger, winemaker and CEO of Schloss Gobelsburg, when asked about what makes his vineyards so special. The area around the castle named Schloss Gobelsburg has been used for winemaking by monks ever since the nearby Stift Zwettl, a Cistercian monastery, was founded in 1137. The first document concerning ownership of the castle was signed in 1171 between the Earl of Kuenring and the Stift Zwettl in favour of the Earl. Having changed aristocratic hands many times since then, it eventually fell back into the lap of the

tion, Father Bertrand introduced the Burgundy vine Pinot Noir to the region, achieving outstanding results in spite the fact that the viticulture and vinification of Pinot Noir is far more complex and difficult than most other grape varieties. Father Bertrand also managed to transform an altar wine into an Austrian classic. Today, the Gobelsburger Messwein is a famous specialty of the winery. It is a light and crisp

monastery. It was 1740 when the final aristocratic owner Baron Ehrenreich von Hohenfeld was forced to enter the monastery due to financial problems caused by renovating the castle. Since then, Schloss Gobelsburg has morphed into one of the major and most distinguished wineries in Austria. However, it was not until after World War II that the winery truly flourished. This was when Father Bertrand Baumann, who also served as an Abbot at Sfift Zwettl, took charge of Schloss Gobelsburg’s renovation and oversaw the re-vitalization of the winery from 1958. As a consequence of Cistercian tradi-