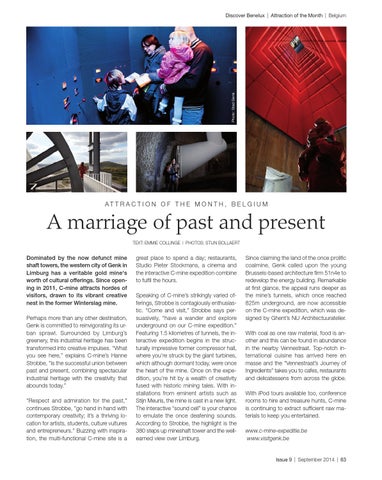 A marriage of past and present TEXT: EMMIE COLLINGE | PHOTOS: STIJN BOLLAERT

Dominated by the now defunct mine shaft towers, the western city of Genk in Limburg has a veritable gold mine&#39;s worth of cultural offerings. Since opening in 2011, C-mine attracts hordes of visitors, drawn to its vibrant creative nest in the former Winterslag mine. Perhaps more than any other destination, Genk is committed to reinvigorating its urban sprawl. Surrounded by Limburg’s greenery, this industrial heritage has been transformed into creative impulses. “What you see here,” explains C-mine’s Hanne Strobbe, “is the successful union between past and present, combining spectacular industrial heritage with the creativity that abounds today.” “Respect and admiration for the past,” continues Strobbe, “go hand in hand with contemporary creativity; it’s a thriving location for artists, students, culture vultures and entrepreneurs.” Buzzing with inspiration, the multi-functional C-mine site is a

great place to spend a day; restaurants, Studio Pieter Stockmans, a cinema and the interactive C-mine expedition combine to fulfil the hours. Speaking of C-mine’s strikingly varied offerings, Strobbe is contagiously enthusiastic. “Come and visit,” Strobbe says persuasively, “have a wander and explore underground on our C-mine expedition.” Featuring 1.5 kilometres of tunnels, the interactive expedition begins in the structurally impressive former compressor hall, where you’re struck by the giant turbines, which although dormant today, were once the heart of the mine. Once on the expedition, you’re hit by a wealth of creativity fused with historic mining tales. With installations from eminent artists such as Stijn Meuris, the mine is cast in a new light. The interactive “sound cell” is your chance to emulate the once deafening sounds. According to Strobbe, the highlight is the 380 steps up mineshaft tower and the wellearned view over Limburg.

Since claiming the land of the once prolific coalmine, Genk called upon the young Brussels-based architecture firm 51n4e to redevelop the energy building. Remarkable at first glance, the appeal runs deeper as the mine’s tunnels, which once reached 825m underground, are now accessible on the C-mine expedition, which was designed by Ghent’s NU Architectuuratelier. With coal as one raw material, food is another and this can be found in abundance in the nearby Vennestraat. Top-notch international cuisine has arrived here en masse and the “Vennestraat’s Journey of Ingredients” takes you to cafes, restaurants and delicatessens from across the globe. With iPod tours available too, conference rooms to hire and treasure hunts, C-mine is continuing to extract sufficient raw materials to keep you entertained. www.c-mine-expeditie.be www.visitgenk.be