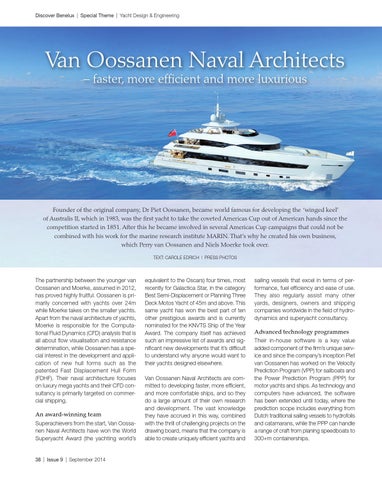 Founder of the original company, Dr Piet Oossanen, became world famous for developing the ‘winged keel’ of Australis II, which in 1983, was the first yacht to take the coveted Americas Cup out of American hands since the competition started in 1851. After this he became involved in several Americas Cup campaigns that could not be combined with his work for the marine research institute MARIN. That’s why he created his own business, which Perry van Oossanen and Niels Moerke took over. TEXT: CAROLE EDRICH | PRESS PHOTOS

The partnership between the younger van Oossanen and Moerke, assumed in 2012, has proved highly fruitful. Oossanen is primarily concerned with yachts over 24m while Moerke takes on the smaller yachts. Apart from the naval architecture of yachts, Moerke is responsible for the Computational Fluid Dynamics (CFD) analysis that is all about flow visualisation and resistance determination, while Oossanen has a special interest in the development and application of new hull forms such as the patented Fast Displacement Hull Form (FDHF). Their naval architecture focuses on luxury mega yachts and their CFD consultancy is primarily targeted on commercial shipping.

An award-winning team Superachievers from the start, Van Oossanen Naval Architects have won the World Superyacht Award (the yachting world’s

equivalent to the Oscars) four times, most recently for Galactica Star, in the category Best Semi-Displacement or Planning Three Deck Motos Yacht of 45m and above. This same yacht has won the best part of ten other prestigious awards and is currently nominated for the KNVTS Ship of the Year Award. The company itself has achieved such an impressive list of awards and significant new developments that it’s difficult to understand why anyone would want to their yachts designed elsewhere. Van Oossanen Naval Architects are committed to developing faster, more efficient, and more comfortable ships, and so they do a large amount of their own research and development. The vast knowledge they have accrued in this way, combined with the thrill of challenging projects on the drawing board, means that the company is able to create uniquely efficient yachts and

sailing vessels that excel in terms of performance, fuel efficiency and ease of use. They also regularly assist many other yards, designers, owners and shipping companies worldwide in the field of hydrodynamics and superyacht consultancy.

Advanced technology programmes Their in-house software is a key value added component of the firm’s unique service and since the company’s inception Piet van Oossanen has worked on the Velocity Prediction Program (VPP) for sailboats and the Power Prediction Program (PPP) for motor yachts and ships. As technology and computers have advanced, the software has been extended until today, where the prediction scope includes everything from Dutch traditional sailing vessels to hydrofoils and catamarans, while the PPP can handle a range of craft from planing speedboats to 300+m containerships.