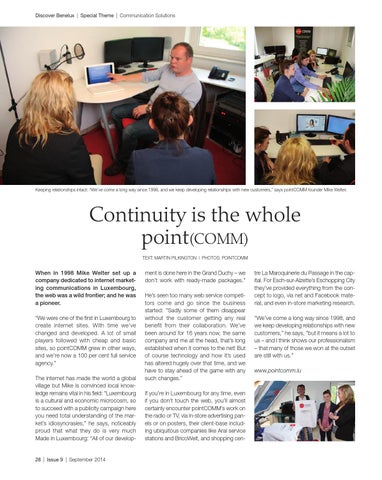 When in 1998 Mike Welter set up a company dedicated to internet marketing communications in Luxembourg, the web was a wild frontier; and he was a pioneer. “We were one of the first in Luxembourg to create internet sites. With time we’ve changed and developed. A lot of small players followed with cheap and basic sites, so pointCOMM grew in other ways, and we’re now a 100 per cent full service agency.” The internet has made the world a global village but Mike is convinced local knowledge remains vital in his field: “Luxembourg is a cultural and economic microcosm, so to succeed with a publicity campaign here you need total understanding of the market’s idiosyncrasies,” he says, noticeably proud that what they do is very much Made in Luxembourg: “All of our develop-

ment is done here in the Grand Duchy – we don’t work with ready-made packages.” He’s seen too many web service competitors come and go since the business started: “Sadly some of them disappear without the customer getting any real benefit from their collaboration. We’ve been around for 16 years now, the same company and me at the head, that’s long established when it comes to the net! But of course technology and how it’s used has altered hugely over that time, and we have to stay ahead of the game with any such changes.” If you’re in Luxembourg for any time, even if you don’t touch the web, you’ll almost certainly encounter pointCOMM’s work on the radio or TV, via in-store advertising panels or on posters, their client-base including ubiquitous companies like Aral service stations and BricoWelt, and shopping cen-

tre La Maroquinerie du Passage in the capital. For Esch-sur-Alzette’s Eschopping City they’ve provided everything from the concept to logo, via net and Facebook material, and even in-store marketing research. “We’ve come a long way since 1998, and we keep developing relationships with new customers,” he says, “but it means a lot to us – and I think shows our professionalism – that many of those we won at the outset are still with us.” www.pointcomm.lu