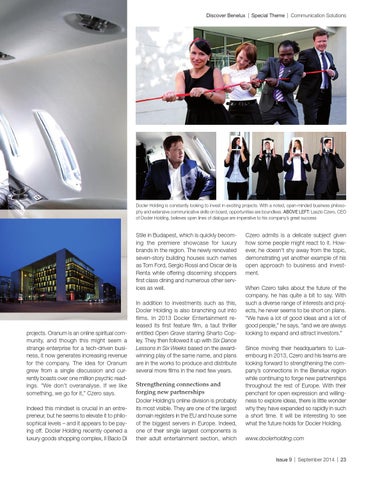 Docler Holding is constantly looking to invest in exciting projects. With a noted, open-minded business philosophy and extensive communicative skills on board, opportunities are boundless. ABOVE LEFT: Laszlo Czero, CEO of Docler Holding, believes open lines of dialogue are imperative to his company’s great success

Stile in Budapest, which is quickly becoming the premiere showcase for luxury brands in the region. The newly renovated seven-story building houses such names as Tom Ford, Sergio Rossi and Oscar de la Renta while offering discerning shoppers first class dining and numerous other services as well.

projects. Oranum is an online spiritual community, and though this might seem a strange enterprise for a tech-driven business, it now generates increasing revenue for the company. The idea for Oranum grew from a single discussion and currently boasts over one million psychic readings. “We don’t overanalyse. If we like something, we go for it,” Czero says. Indeed this mindset is crucial in an entrepreneur, but he seems to elevate it to philosophical levels – and it appears to be paying off. Docler Holding recently opened a luxury goods shopping complex, Il Bacio Di

In addition to investments such as this, Docler Holding is also branching out into films. In 2013 Docler Entertainment released its first feature film, a taut thriller entitled Open Grave starring Sharto Copley. They then followed it up with Six Dance Lessons in Six Weeks based on the awardwinning play of the same name, and plans are in the works to produce and distribute several more films in the next few years.

Strengthening connections and forging new partnerships Docler Holding’s online division is probably its most visible. They are one of the largest domain registers in the EU and house some of the biggest servers in Europe. Indeed, one of their single largest components is their adult entertainment section, which

Czero admits is a delicate subject given how some people might react to it. However, he doesn’t shy away from the topic, demonstrating yet another example of his open approach to business and investment. When Czero talks about the future of the company, he has quite a bit to say. With such a diverse range of interests and projects, he never seems to be short on plans. “We have a lot of good ideas and a lot of good people,” he says, “and we are always looking to expand and attract investors.” Since moving their headquarters to Luxembourg in 2013, Czero and his teams are looking forward to strengthening the company’s connections in the Benelux region while continuing to forge new partnerships throughout the rest of Europe. With their penchant for open expression and willingness to explore ideas, there is little wonder why they have expanded so rapidly in such a short time. It will be interesting to see what the future holds for Docler Holding. www.doclerholding.com