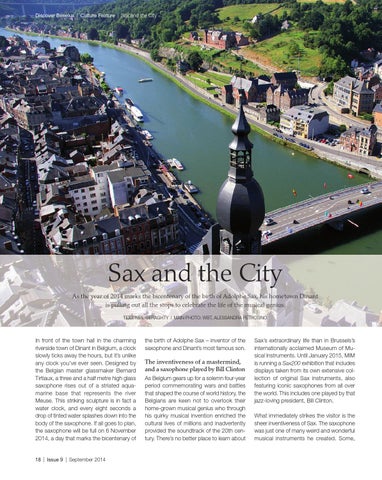 Sax and the City As the year of 2014 marks the bicentenary of the birth of Adolphe Sax, his hometown Dinant is pulling out all the stops to celebrate the life of the musical genius. TEXT: NEIL GERAGHTY | MAIN PHOTO: WBT, ALESSANDRA PETROSINO

In front of the town hall in the charming riverside town of Dinant in Belgium, a clock slowly ticks away the hours, but it’s unlike any clock you’ve ever seen. Designed by the Belgian master glassmaker Bernard Tirtiaux, a three and a half metre high glass saxophone rises out of a striated aquamarine base that represents the river Meuse. This striking sculpture is in fact a water clock, and every eight seconds a drop of tinted water splashes down into the body of the saxophone. If all goes to plan, the saxophone will be full on 6 November 2014, a day that marks the bicentenary of

the birth of Adolphe Sax – inventor of the saxophone and Dinant’s most famous son.

The inventiveness of a mastermind, and a saxophone played by Bill Clinton As Belgium gears up for a solemn four-year period commemorating wars and battles that shaped the course of world history, the Belgians are keen not to overlook their home-grown musical genius who through his quirky musical invention enriched the cultural lives of millions and inadvertently provided the soundtrack of the 20th century. There’s no better place to learn about

Sax’s extraordinary life than in Brussels’s internationally acclaimed Museum of Musical Instruments. Until January 2015, MIM is running a Sax200 exhibition that includes displays taken from its own extensive collection of original Sax instruments, also featuring iconic saxophones from all over the world. This includes one played by that jazz-loving president, Bill Clinton. What immediately strikes the visitor is the sheer inventiveness of Sax. The saxophone was just one of many weird and wonderful musical instruments he created. Some,