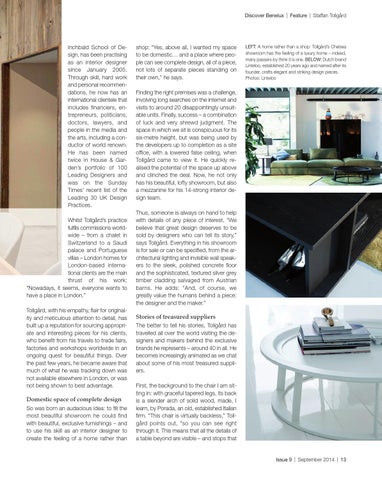 Inchbald School of Design, has been practising as an interior designer since January 2005. Through skill, hard work and personal recommendations, he now has an international clientele that includes financiers, entrepreneurs, politicians, doctors, lawyers, and people in the media and the arts, including a conductor of world renown. He has been named twice in House &amp; Garden’s portfolio of 100 Leading Designers and was on the Sunday Times’ recent list of the Leading 30 UK Design Practices. Whilst Tollgård’s practice fulfils commissions worldwide – from a chalet in Switzerland to a Saudi palace and Portuguese villas – London homes for London-based international clients are the main thrust of his work: “Nowadays, it seems, everyone wants to have a place in London.” Tollgård, with his empathy, flair for originality and meticulous attention to detail, has built up a reputation for sourcing appropriate and interesting pieces for his clients, who benefit from his travels to trade fairs, factories and workshops worldwide in an ongoing quest for beautiful things. Over the past few years, he became aware that much of what he was tracking down was not available elsewhere in London, or was not being shown to best advantage.

Domestic space of complete design So was born an audacious idea: to fill the most beautiful showroom he could find with beautiful, exclusive furnishings – and to use his skill as an interior designer to create the feeling of a home rather than

shop: “Yes, above all, I wanted my space to be domestic… and a place where people can see complete design, all of a piece, not lots of separate pieces standing on their own,” he says.

LEFT: A home rather than a shop: Tollgård’s Chelsea showroom has the feeling of a luxury home – indeed, many passers-by think it is one. BELOW: Dutch brand Linteloo, established 20 years ago and named after its founder, crafts elegant and striking design pieces. Photos: Linteloo

Finding the right premises was a challenge, involving long searches on the internet and visits to around 20 disappointingly unsuitable units. Finally, success – a combination of luck and very shrewd judgment. The space in which we sit is conspicuous for its six-metre height, but was being used by the developers up to completion as a site office, with a lowered false ceiling, when Tollgård came to view it. He quickly realised the potential of the space up above and clinched the deal. Now, he not only has his beautiful, lofty showroom, but also a mezzanine for his 14-strong interior design team. Thus, someone is always on hand to help with details of any piece of interest. “We believe that great design deserves to be sold by designers who can tell its story,” says Tollgård. Everything in his showroom is for sale or can be specified, from the architectural lighting and invisible wall speakers to the sleek, polished concrete floor and the sophisticated, textured silver grey timber cladding salvaged from Austrian barns. He adds: “And, of course, we greatly value the humans behind a piece: the designer and the maker.”

Stories of treasured suppliers The better to tell his stories, Tollgård has travelled all over the world visiting the designers and makers behind the exclusive brands he represents – around 40 in all. He becomes increasingly animated as we chat about some of his most treasured suppliers. First, the background to the chair I am sitting in: with graceful tapered legs, its back is a slender arch of solid wood, made, I learn, by Porada, an old, established Italian firm. “This chair is virtually backless,” Tollgård points out, “so you can see right through it. This means that all the details of a table beyond are visible – and stops that