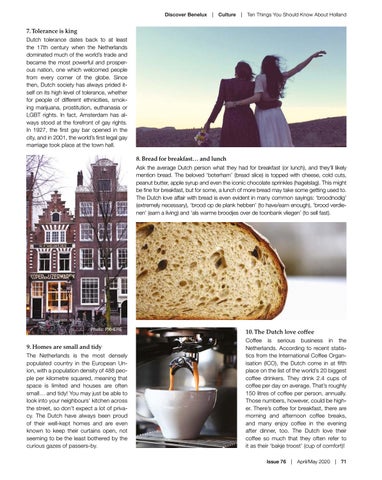 Discover Benelux  |  Culture  |  Ten Things You Should Know About Holland

7. Tolerance is king Dutch tolerance dates back to at least the 17th century when the Netherlands dominated much of the world’s trade and became the most powerful and prosperous nation, one which welcomed people from every corner of the globe. Since then, Dutch society has always prided itself on its high level of tolerance, whether for people of different ethnicities, smoking marijuana, prostitution, euthanasia or LGBT rights. In fact, Amsterdam has always stood at the forefront of gay rights. In 1927, the first gay bar opened in the city, and in 2001, the world’s first legal gay marriage took place at the town hall.

8. Bread for breakfast… and lunch Ask the average Dutch person what they had for breakfast (or lunch), and they’ll likely mention bread. The beloved ‘boterham’ (bread slice) is topped with cheese, cold cuts, peanut butter, apple syrup and even the iconic chocolate sprinkles (hagelslag). This might be fine for breakfast, but for some, a lunch of more bread may take some getting used to. The Dutch love affair with bread is even evident in many common sayings: ‘broodnodig’ (extremely necessary), ‘brood op de plank hebben’ (to have/earn enough), ‘brood verdienen’ (earn a living) and ‘als warme broodjes over de toonbank vliegen’ (to sell fast).

9. Homes are small and tidy The Netherlands is the most densely populated country in the European Union, with a population density of 488 people per kilometre squared, meaning that space is limited and houses are often small… and tidy! You may just be able to look into your neighbours’ kitchen across the street, so don’t expect a lot of privacy. The Dutch have always been proud of their well-kept homes and are even known to keep their curtains open, not seeming to be the least bothered by the curious gazes of passers-by.

10. The Dutch love coffee Coffee is serious business in the Netherlands. According to recent statistics from the International Coffee Organisation (ICO), the Dutch come in at fifth place on the list of the world’s 20 biggest coffee drinkers. They drink 2.4 cups of coffee per day on average. That’s roughly 150 litres of coffee per person, annually. Those numbers, however, could be higher. There’s coffee for breakfast, there are morning and afternoon coffee breaks, and many enjoy coffee in the evening after dinner, too. The Dutch love their coffee so much that they often refer to it as their ‘bakje troost’ (cup of comfort)! Issue 76  |  April/May 2020  |  71