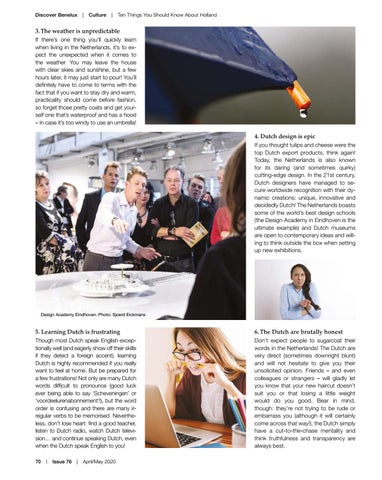 Discover Benelux  |  Culture  |  Ten Things You Should Know About Holland

3. The weather is unpredictable If there’s one thing you’ll quickly learn when living in the Netherlands, it’s to expect the unexpected when it comes to the weather. You may leave the house with clear skies and sunshine, but a few hours later, it may just start to pour! You’ll definitely have to come to terms with the fact that if you want to stay dry and warm, practicality should come before fashion, so forget those pretty coats and get yourself one that’s waterproof and has a hood – in case it’s too windy to use an umbrella!

4. Dutch design is epic If you thought tulips and cheese were the top Dutch export products, think again! Today, the Netherlands is also known for its daring (and sometimes quirky) cutting-edge design. In the 21st century, Dutch designers have managed to secure worldwide recognition with their dynamic creations: unique, innovative and decidedly Dutch! The Netherlands boasts some of the world’s best design schools (the Design Academy in Eindhoven is the ultimate example) and Dutch museums are open to contemporary ideas and willing to think outside the box when setting up new exhibitions.

6. The Dutch are brutally honest

Though most Dutch speak English exceptionally well (and eagerly show off their skills if they detect a foreign accent), learning Dutch is highly recommended if you really want to feel at home. But be prepared for a few frustrations! Not only are many Dutch words difficult to pronounce (good luck ever being able to say ‘Scheveningen’ or ‘voordeelurenabonnement’!), but the word order is confusing and there are many irregular verbs to be memorised. Nevertheless, don’t lose heart: find a good teacher, listen to Dutch radio, watch Dutch television… and continue speaking Dutch, even when the Dutch speak English to you!

Don’t expect people to sugarcoat their words in the Netherlands! The Dutch are very direct (sometimes downright blunt) and will not hesitate to give you their unsolicited opinion. Friends – and even colleagues or strangers – will gladly let you know that your new haircut doesn’t suit you or that losing a little weight would do you good. Bear in mind, though: they’re not trying to be rude or embarrass you (although it will certainly come across that way!), the Dutch simply have a cut-to-the-chase mentality and think truthfulness and transparency are always best.