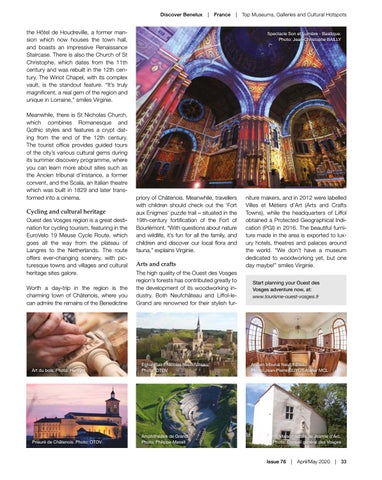 the Hôtel de Houdreville, a former mansion which now houses the town hall, and boasts an impressive Renaissance Staircase. There is also the Church of St Christophe, which dates from the 11th century and was rebuilt in the 12th century. The Wiriot Chapel, with its complex vault, is the standout feature. “It’s truly magnificent, a real gem of the region and unique in Lorraine,” smiles Virginie.

Meanwhile, there is St Nicholas Church, which combines Romanesque and Gothic styles and features a crypt dating from the end of the 12th century. The tourist office provides guided tours of the city’s various cultural gems during its summer discovery programme, where you can learn more about sites such as the Ancien tribunal d’instance, a former convent, and the Scala, an Italian theatre which was built in 1829 and later transformed into a cinema. priory of Châtenois. Meanwhile, travellers with children should check out the ‘Fort Cycling and cultural heritage aux Enigmes’ puzzle trail – situated in the 19th-century fortification of the Fort of Ouest des Vosges region is a great destiBourlémont. “With questions about nature nation for cycling tourism, featuring in the and wildlife, it’s fun for all the family, and EuroVelo 19 Meuse Cycle Route, which children and discover our local flora and goes all the way from the plateau of fauna,” explains Virginie. Langres to the Netherlands. The route offers ever-changing scenery, with picArts and crafts turesque towns and villages and cultural heritage sites galore. The high quality of the Ouest des Vosges region’s forests has contributed greatly to Worth a day-trip in the region is the the development of its woodworking incharming town of Châtenois, where you dustry. Both Neufchâteau and Liffol-lecan admire the remains of the Benedictine Grand are renowned for their stylish fur-

niture makers, and in 2012 were labelled Villes et Métiers d’Art (Arts and Crafts Towns), while the headquarters of Liffol obtained a Protected Geographical Indication (PGI) in 2016. The beautiful furniture made in the area is exported to luxury hotels, theatres and palaces around the world. “We don’t have a museum dedicated to woodworking yet, but one day maybe!” smiles Virginie. Start planning your Ouest des Vosges adventure now, at: www.tourisme-ouest-vosges.fr