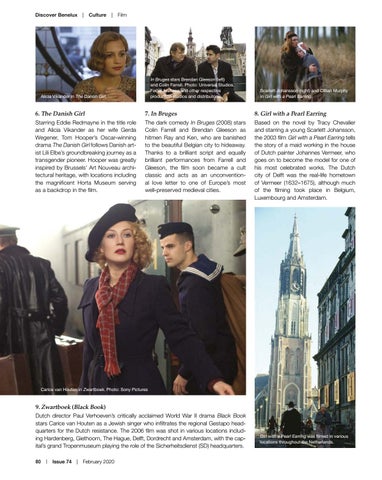 Alicia Vikander in The Danish Girl.

Scarlett Johansson (right) and Cillian Murphy in Girl with a Pearl Earring.

8. Girl with a Pearl Earring

The dark comedy In Bruges (2008) stars Colin Farrell and Brendan Gleeson as hitmen Ray and Ken, who are banished to the beautiful Belgian city to hideaway. Thanks to a brilliant script and equally brilliant performances from Farrell and Gleeson, the film soon became a cult classic and acts as an unconventional love letter to one of Europe’s most well-preserved medieval cities.

Based on the novel by Tracy Chevalier and starring a young Scarlett Johansson, the 2003 film Girl with a Pearl Earring tells the story of a maid working in the house of Dutch painter Johannes Vermeer, who goes on to become the model for one of his most celebrated works. The Dutch city of Delft was the real-life hometown of Vermeer (1632–1675), although much of the filming took place in Belgium, Luxembourg and Amsterdam.

Girl with a Pearl Earring was filmed in various locations throughout the Netherlands.