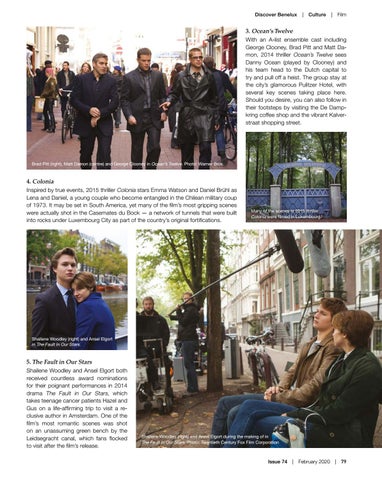 3. Ocean’s Twelve With an A-list ensemble cast including George Clooney, Brad Pitt and Matt Damon, 2014 thriller Ocean’s Twelve sees Danny Ocean (played by Clooney) and his team head to the Dutch capital to try and pull off a heist. The group stay at the city’s glamorous Pulitzer Hotel, with several key scenes taking place here. Should you desire, you can also follow in their footsteps by visiting the De Dampkring coffee shop and the vibrant Kalverstraat shopping street.

4. Colonia Inspired by true events, 2015 thriller Colonia stars Emma Watson and Daniel Brühl as Lena and Daniel, a young couple who become entangled in the Chilean military coup of 1973. It may be set in South America, yet many of the film’s most gripping scenes were actually shot in the Casemates du Bock — a network of tunnels that were built into rocks under Luxembourg City as part of the country’s original fortifications.

Many of the scenes in 2015 thriller Colonia were filmed in Luxembourg.

Shailene Woodley (right) and Ansel Elgort in The Fault In Our Stars.

5. The Fault in Our Stars Shailene Woodley and Ansel Elgort both received countless award nominations for their poignant performances in 2014 drama The Fault in Our Stars, which takes teenage cancer patients Hazel and Gus on a life-affirming trip to visit a reclusive author in Amsterdam. One of the film’s most romantic scenes was shot on an unassuming green bench by the Leidsegracht canal, which fans flocked to visit after the film’s release.

Shailene Woodley (right) and Ansel Elgort during the making of in The Fault In Our Stars. Photo: Twentieth Century Fox Film Corporation