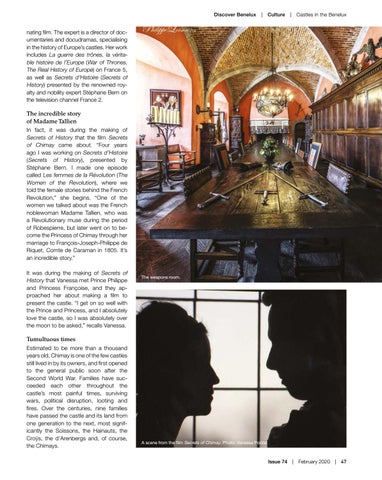 nating film. The expert is a director of documentaries and docudramas, specialising in the history of Europe’s castles. Her work includes La guerre des trônes, la véritable histoire de l’Europe (War of Thrones, The Real History of Europe) on France 5, as well as Secrets d’Histoire (Secrets of History) presented by the renowned royalty and nobility expert Stéphane Bern on the television channel France 2.

The incredible story of Madame Tallien In fact, it was during the making of Secrets of History that the film Secrets of Chimay came about. “Four years ago I was working on Secrets d’Histoire (Secrets of History), presented by Stéphane Bern. I made one episode called Les femmes de la Révolution (The Women of the Revolution), where we told the female stories behind the French Revolution,” she begins. “One of the women we talked about was the French noblewoman Madame Tallien, who was a Revolutionary muse during the period of Robespierre, but later went on to become the Princess of Chimay through her marriage to François-Joseph-Philippe de Riquet, Comte de Caraman in 1805. It’s an incredible story.” It was during the making of Secrets of History that Vanessa met Prince Philippe and Princess Françoise, and they approached her about making a film to present the castle. “I get on so well with the Prince and Princess, and I absolutely love the castle, so I was absolutely over the moon to be asked,” recalls Vanessa.

Tumultuous times Estimated to be more than a thousand years old, Chimay is one of the few castles still lived in by its owners, and first opened to the general public soon after the Second World War. Families have succeeded each other throughout the castle’s most painful times, surviving wars, political disruption, looting and fires. Over the centuries, nine families have passed the castle and its land from one generation to the next, most significantly the Soissons, the Hainauts, the Croÿs, the d’Arenbergs and, of course, the Chimays.

A scene from the film Secrets of Chimay. Photo: Vanessa Pontet