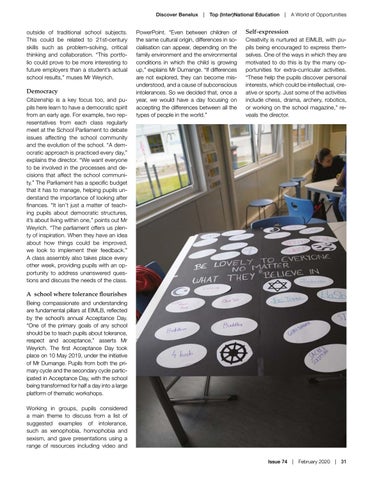 outside of traditional school subjects. This could be related to 21st-century skills such as problem-solving, critical thinking and collaboration. “This portfolio could prove to be more interesting to future employers than a student’s actual school results,” muses Mr Weyrich.

Democracy Citizenship is a key focus too, and pupils here learn to have a democratic spirit from an early age. For example, two representatives from each class regularly meet at the School Parliament to debate issues affecting the school community and the evolution of the school. “A democratic approach is practiced every day,” explains the director. “We want everyone to be involved in the processes and decisions that affect the school community.” The Parliament has a specific budget that it has to manage, helping pupils understand the importance of looking after finances. “It isn’t just a matter of teaching pupils about democratic structures, it’s about living within one,” points out Mr Weyrich. “The parliament offers us plenty of inspiration. When they have an idea about how things could be improved, we look to implement their feedback.” A class assembly also takes place every other week, providing pupils with an opportunity to address unanswered questions and discuss the needs of the class.

PowerPoint. “Even between children of the same cultural origin, differences in socialisation can appear, depending on the family environment and the environmental conditions in which the child is growing up,” explains Mr Dumange. “If differences are not explored, they can become misunderstood, and a cause of subconscious intolerances. So we decided that, once a year, we would have a day focusing on accepting the differences between all the types of people in the world.”

Self-expression Creativity is nurtured at EIMLB, with pupils being encouraged to express themselves. One of the ways in which they are motivated to do this is by the many opportunities for extra-curricular activities. “These help the pupils discover personal interests, which could be intellectual, creative or sporty. Just some of the activities include chess, drama, archery, robotics, or working on the school magazine,” reveals the director.

A school where tolerance flourishes Being compassionate and understanding are fundamental pillars at EIMLB, reflected by the school’s annual Acceptance Day. “One of the primary goals of any school should be to teach pupils about tolerance, respect and acceptance,” asserts Mr Weyrich. The first Acceptance Day took place on 10 May 2019, under the initiative of Mr Dumange. Pupils from both the primary cycle and the secondary cycle participated in Acceptance Day, with the school being transformed for half a day into a large platform of thematic workshops. Working in groups, pupils considered a main theme to discuss from a list of suggested examples of intolerance, such as xenophobia, homophobia and sexism, and gave presentations using a range of resources including video and Issue 74  |  February 2020  |  31