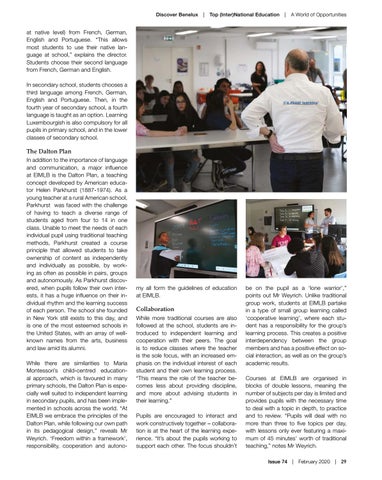 The Dalton Plan In addition to the importance of language and communication, a major influence at EIMLB is the Dalton Plan, a teaching concept developed by American educator Helen Parkhurst (1887-1974). As a young teacher at a rural American school, Parkhurst was faced with the challenge of having to teach a diverse range of students aged from four to 14 in one class. Unable to meet the needs of each individual pupil using traditional teaching methods, Parkhurst created a course principle that allowed students to take ownership of content as independently and individually as possible, by working as often as possible in pairs, groups and autonomously. As Parkhurst discovered, when pupils follow their own interests, it has a huge influence on their individual rhythm and the learning success of each person. The school she founded in New York still exists to this day, and is one of the most esteemed schools in the United States, with an array of wellknown names from the arts, business and law amid its alumni. While there are similarities to Maria Montessori’s child-centred educational approach, which is favoured in many primary schools, the Dalton Plan is especially well suited to independent learning in secondary pupils, and has been implemented in schools across the world. “At EIMLB we embrace the principles of the Dalton Plan, while following our own path in its pedagogical design,” reveals Mr Weyrich. ‘Freedom within a framework’, responsibility, cooperation and autono-

my all form the guidelines of education at EIMLB.

Collaboration While more traditional courses are also followed at the school, students are introduced to independent learning and cooperation with their peers. The goal is to reduce classes where the teacher is the sole focus, with an increased emphasis on the individual interest of each student and their own learning process. “This means the role of the teacher becomes less about providing discipline, and more about advising students in their learning.” Pupils are encouraged to interact and work constructively together – collaboration is at the heart of the learning experience. “It’s about the pupils working to support each other. The focus shouldn’t

be on the pupil as a ‘lone warrior’,” points out Mr Weyrich. Unlike traditional group work, students at EIMLB partake in a type of small group learning called ‘cooperative learning’, where each student has a responsibility for the group’s learning process. This creates a positive interdependency between the group members and has a positive effect on social interaction, as well as on the group’s academic results. Courses at EIMLB are organised in blocks of double lessons, meaning the number of subjects per day is limited and provides pupils with the necessary time to deal with a topic in depth, to practice and to review. “Pupils will deal with no more than three to five topics per day, with lessons only ever featuring a maximum of 45 minutes’ worth of traditional teaching,” notes Mr Weyrich. Issue 74  |  February 2020  |  29