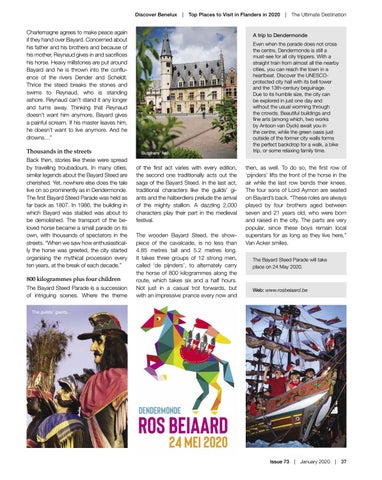 Charlemagne agrees to make peace again if they hand over Bayard. Concerned about his father and his brothers and because of his mother, Reynaud gives in and sacrifices his horse. Heavy millstones are put around Bayard and he is thrown into the confluence of the rivers Dender and Scheldt. Thrice the steed breaks the stones and swims to Reynaud, who is standing ashore. Reynaud can’t stand it any longer and turns away. Thinking that Reynaud doesn’t want him anymore, Bayard gives a painful scream. If his master leaves him, he doesn’t want to live anymore. And he drowns…”

Thousands in the streets Back then, stories like these were spread by travelling troubadours. In many cities, similar legends about the Bayard Steed are cherished. Yet, nowhere else does the tale live on so prominently as in Dendermonde. The first Bayard Steed Parade was held as far back as 1807. In 1986, the building in which Bayard was stabled was about to be demolished. The transport of the beloved horse became a small parade on its own, with thousands of spectators in the streets. “When we saw how enthusiastically the horse was greeted, the city started organising the mythical procession every ten years, at the break of each decade.”

800 kilogrammes plus four children The Bayard Steed Parade is a succession of intriguing scenes. Where the theme

A trip to Dendermonde

of the first act varies with every edition, the second one traditionally acts out the saga of the Bayard Steed. In the last act, traditional characters like the guilds’ giants and the halberdiers prelude the arrival of the mighty stallion. A dazzling 2,000 characters play their part in the medieval festival. The wooden Bayard Steed, the showpiece of the cavalcade, is no less than 4.85 metres tall and 5.2 metres long. It takes three groups of 12 strong men, called ‘de pijnders’, to alternately carry the horse of 800 kilogrammes along the route, which takes six and a half hours. Not just in a casual trot forwards, but with an impressive prance every now and

Even when the parade does not cross the centre, Dendermonde is still a must-see for all city trippers. With a straight train from almost all the nearby cities, you can reach the town in a heartbeat. Discover the UNESCOprotected city hall with its bell tower and the 13th-century beguinage. Due to its humble size, the city can be explored in just one day and without the usual worming through the crowds. Beautiful buildings and fine arts (among which, two works by Antoon van Dyck) await you in the centre, while the green oasis just outside of the former city walls forms the perfect backdrop for a walk, a bike trip, or some relaxing family time.

then, as well. To do so, the first row of ‘pijnders’ lifts the front of the horse in the air while the last row bends their knees. The four sons of Lord Aymon are seated on Bayard’s back. “These roles are always played by four brothers aged between seven and 21 years old, who were born and raised in the city. The parts are very popular, since these boys remain local superstars for as long as they live here,” Van Acker smiles. The Bayard Steed Parade will take place on 24 May 2020.