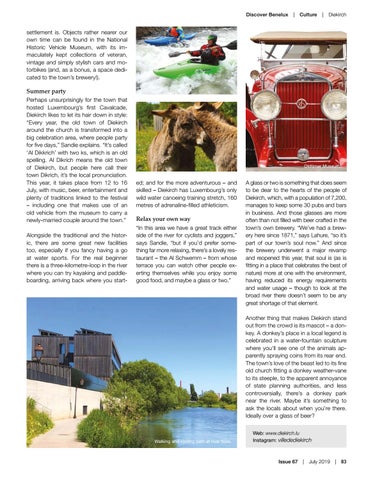 settlement is. Objects rather nearer our own time can be found in the National Historic Vehicle Museum, with its immaculately kept collections of veteran, vintage and simply stylish cars and motorbikes (and, as a bonus, a space dedicated to the town’s brewery!).

Summer party Perhaps unsurprisingly for the town that hosted Luxembourg’s first Cavalcade, Diekirch likes to let its hair down in style: “Every year, the old town of Diekirch around the church is transformed into a big celebration area, where people party for five days,” Sandie explains. “It’s called ‘Al Dikkrich’ with two ks, which is an old spelling. Al Dikrich means the old town of Diekirch, but people here call their town Dikrich, it’s the local pronunciation. This year, it takes place from 12 to 16 July, with music, beer, entertainment and plenty of traditions linked to the festival – including one that makes use of an old vehicle from the museum to carry a newly-married couple around the town.”

Relax your own way

Alongside the traditional and the historic, there are some great new facilities too, especially if you fancy having a go at water sports. For the real beginner there is a three-kilometre-loop in the river where you can try kayaking and paddleboarding, arriving back where you start-

“In this area we have a great track either side of the river for cyclists and joggers,” says Sandie, “but if you’d prefer something far more relaxing, there’s a lovely restaurant – the Al Schwemm – from whose terrace you can watch other people exerting themselves while you enjoy some good food, and maybe a glass or two.”

ed; and for the more adventurous – and skilled – Diekirch has Luxembourg’s only wild water canoeing training stretch, 160 metres of adrenaline-filled athleticism.

A glass or two is something that does seem to be dear to the hearts of the people of Diekirch, which, with a population of 7,200, manages to keep some 30 pubs and bars in business. And those glasses are more often than not filled with beer crafted in the town’s own brewery. “We’ve had a brewery here since 1871,” says Lahure, “so it’s part of our town’s soul now.” And since the brewery underwent a major revamp and reopened this year, that soul is (as is fitting in a place that celebrates the best of nature) more at one with the environment, having reduced its energy requirements and water usage – though to look at the broad river there doesn’t seem to be any great shortage of that element. Another thing that makes Diekirch stand out from the crowd is its mascot – a donkey. A donkey’s place in a local legend is celebrated in a water-fountain sculpture where you’ll see one of the animals apparently spraying coins from its rear end. The town’s love of the beast led to its fine old church fitting a donkey weather-vane to its steeple, to the apparent annoyance of state planning authorities, and less controversially, there’s a donkey park near the river. Maybe it’s something to ask the locals about when you’re there. Ideally over a glass of beer?