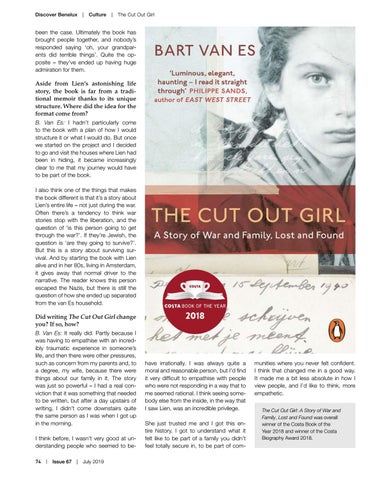 been the case. Ultimately the book has brought people together, and nobody’s responded saying ‘oh, your grandparents did terrible things’. Quite the opposite – they’ve ended up having huge admiration for them.

Aside from Lien’s astonishing life story, the book is far from a traditional memoir thanks to its unique structure. Where did the idea for the format come from? B. Van Es: I hadn’t particularly come to the book with a plan of how I would structure it or what I would do. But once we started on the project and I decided to go and visit the houses where Lien had been in hiding, it became increasingly clear to me that my journey would have to be part of the book. I also think one of the things that makes the book different is that it’s a story about Lien’s entire life – not just during the war. Often there’s a tendency to think war stories stop with the liberation, and the question of ‘is this person going to get through the war?’. If they’re Jewish, the question is ‘are they going to survive?’. But this is a story about surviving survival. And by starting the book with Lien alive and in her 80s, living in Amsterdam, it gives away that normal driver to the narrative. The reader knows this person escaped the Nazis, but there is still the question of how she ended up separated from the van Es household.

Did writing The Cut Out Girl change you? If so, how? B. Van Es: It really did. Partly because I was having to empathise with an incredibly traumatic experience in someone’s life, and then there were other pressures, such as concern from my parents and, to a degree, my wife, because there were things about our family in it. The story was just so powerful – I had a real conviction that it was something that needed to be written, but after a day upstairs of writing, I didn’t come downstairs quite the same person as I was when I got up in the morning. I think before, I wasn’t very good at understanding people who seemed to be74  |  Issue 67  |  July 2019

have irrationally. I was always quite a moral and reasonable person, but I’d find it very difficult to empathise with people who were not responding in a way that to me seemed rational. I think seeing somebody else from the inside, in the way that I saw Lien, was an incredible privilege. She just trusted me and I got this entire history. I got to understand what it felt like to be part of a family you didn’t feel totally secure in, to be part of com-

munities where you never felt confident. I think that changed me in a good way. It made me a bit less absolute in how I view people, and I’d like to think, more empathetic. The Cut Out Girl: A Story of War and Family, Lost and Found was overall winner of the Costa Book of the Year 2018 and winner of the Costa Biography Award 2018.