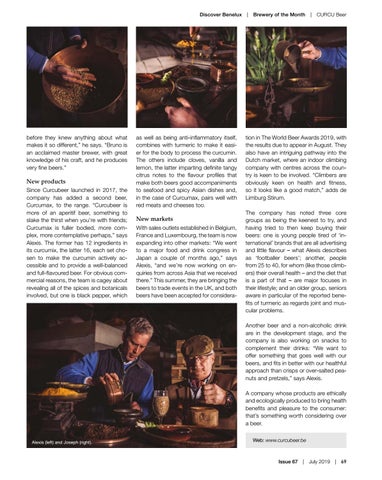 before they knew anything about what makes it so different,” he says. “Bruno is an acclaimed master brewer, with great knowledge of his craft, and he produces very fine beers.”

New products Since Curcubeer launched in 2017, the company has added a second beer, Curcumax, to the range. “Curcubeer is more of an aperitif beer, something to slake the thirst when you’re with friends; Curcumax is fuller bodied, more complex, more contemplative perhaps,” says Alexis. The former has 12 ingredients in its curcumix, the latter 16, each set chosen to make the curcumin actively accessible and to provide a well-balanced and full-flavoured beer. For obvious commercial reasons, the team is cagey about revealing all of the spices and botanicals involved, but one is black pepper, which

as well as being anti-inflammatory itself, combines with turmeric to make it easier for the body to process the curcumin. The others include cloves, vanilla and lemon, the latter imparting definite tangy citrus notes to the flavour profiles that make both beers good accompaniments to seafood and spicy Asian dishes and, in the case of Curcumax, pairs well with red meats and cheeses too.

New markets With sales outlets established in Belgium, France and Luxembourg, the team is now expanding into other markets: “We went to a major food and drink congress in Japan a couple of months ago,” says Alexis, “and we’re now working on enquiries from across Asia that we received there.” This summer, they are bringing the beers to trade events in the UK, and both beers have been accepted for considera-

tion in The World Beer Awards 2019, with the results due to appear in August. They also have an intriguing pathway into the Dutch market, where an indoor climbing company with centres across the country is keen to be involved. “Climbers are obviously keen on health and fitness, so it looks like a good match,” adds de Limburg Stirum. The company has noted three core groups as being the keenest to try, and having tried to then keep buying their beers: one is young people tired of ‘international’ brands that are all advertising and little flavour – what Alexis describes as ‘footballer beers’; another, people from 25 to 40, for whom (like those climbers) their overall health – and the diet that is a part of that – are major focuses in their lifestyle; and an older group, seniors aware in particular of the reported benefits of turmeric as regards joint and muscular problems. Another beer and a non-alcoholic drink are in the development stage, and the company is also working on snacks to complement their drinks: “We want to offer something that goes well with our beers, and fits in better with our healthful approach than crisps or over-salted peanuts and pretzels,” says Alexis. A company whose products are ethically and ecologically produced to bring health benefits and pleasure to the consumer: that’s something worth considering over a beer.