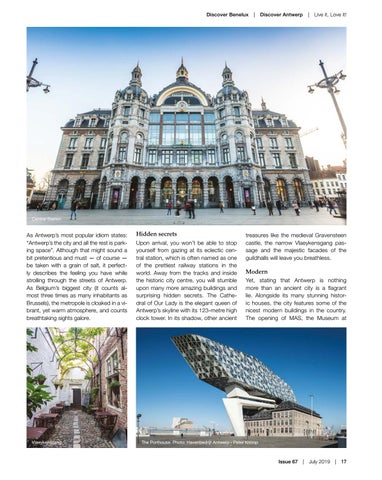 As Antwerp’s most popular idiom states: “Antwerp’s the city and all the rest is parking space”. Although that might sound a bit pretentious and must — of course — be taken with a grain of salt, it perfectly describes the feeling you have while strolling through the streets of Antwerp. As Belgium’s biggest city (it counts almost three times as many inhabitants as Brussels), the metropole is cloaked in a vibrant, yet warm atmosphere, and counts breathtaking sights galore.

Hidden secrets Upon arrival, you won’t be able to stop yourself from gazing at its eclectic central station, which is often named as one of the prettiest railway stations in the world. Away from the tracks and inside the historic city centre, you will stumble upon many more amazing buildings and surprising hidden secrets. The Cathedral of Our Lady is the elegant queen of Antwerp’s skyline with its 123-metre high clock tower. In its shadow, other ancient

treasures like the medieval Gravensteen castle, the narrow Vlaeykensgang passage and the majestic facades of the guildhalls will leave you breathless.

Modern Yet, stating that Antwerp is nothing more than an ancient city is a flagrant lie. Alongside its many stunning historic houses, the city features some of the nicest modern buildings in the country. The opening of MAS, the Museum at