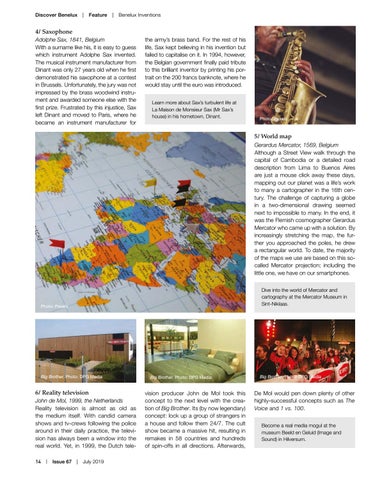 4/ Saxophone Adolphe Sax, 1841, Belgium With a surname like his, it is easy to guess which instrument Adolphe Sax invented. The musical instrument manufacturer from Dinant was only 27 years old when he first demonstrated his saxophone at a contest in Brussels. Unfortunately, the jury was not impressed by the brass woodwind instrument and awarded someone else with the first prize. Frustrated by this injustice, Sax left Dinant and moved to Paris, where he became an instrument manufacturer for

the army’s brass band. For the rest of his life, Sax kept believing in his invention but failed to capitalise on it. In 1994, however, the Belgian government finally paid tribute to this brilliant inventor by printing his portrait on the 200 francs banknote, where he would stay until the euro was introduced. Learn more about Sax’s turbulent life at La Maison de Monsieur Sax (Mr Sax’s house) in his hometown, Dinant.

5/ World map Gerardus Mercator, 1569, Belgium Although a Street View walk through the capital of Cambodia or a detailed road description from Lima to Buenos Aires are just a mouse click away these days, mapping out our planet was a life’s work to many a cartographer in the 16th century. The challenge of capturing a globe in a two-dimensional drawing seemed next to impossible to many. In the end, it was the Flemish cosmographer Gerardus Mercator who came up with a solution. By increasingly stretching the map, the further you approached the poles, he drew a rectangular world. To date, the majority of the maps we use are based on this socalled Mercator projection; including the little one, we have on our smartphones. Dive into the world of Mercator and cartography at the Mercator Museum in Sint-Niklaas.

6/ Reality television John de Mol, 1999, the Netherlands Reality television is almost as old as the medium itself. With candid camera shows and tv-crews following the police around in their daily practice, the television has always been a window into the real world. Yet, in 1999, the Dutch tele14  |  Issue 67  |  July 2019

vision producer John de Mol took this concept to the next level with the creation of Big Brother. Its (by now legendary) concept: lock up a group of strangers in a house and follow them 24/7. The cult show became a massive hit, resulting in remakes in 58 countries and hundreds of spin-offs in all directions. Afterwards,

De Mol would pen down plenty of other highly-successful concepts such as The Voice and 1 vs. 100. Become a real media mogul at the museum Beeld en Geluid (Image and Sound) in Hilversum.