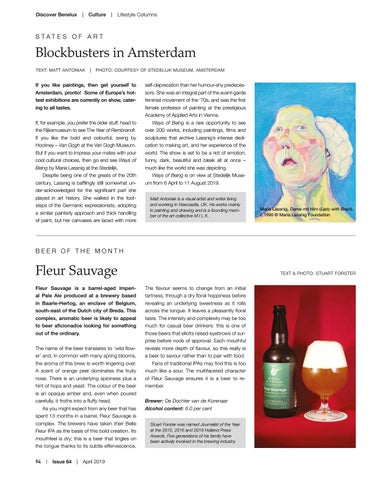 If you like paintings, then get yourself to Amsterdam, pronto! Some of Europe’s hottest exhibitions are currently on show, catering to all tastes. If, for example, you prefer the older stuff, head to the Rijksmuseum to see The Year of Rembrandt. If you like the bold and colourful, swing by Hockney – Van Gogh at the Van Gogh Museum. But if you want to impress your mates with your cool cultural choices, then go and see Ways of Being by Maria Lassnig at the Stedelijk. Despite being one of the greats of the 20th century, Lassnig is bafflingly still somewhat under-acknowledged for the significant part she played in art history. She walked in the footsteps of the Germanic expressionists, adopting a similar painterly approach and thick handling of paint, but her canvases are laced with more

self-deprecation than her humour-shy predecessors. She was an integral part of the avant-garde feminist movement of the ‘70s, and was the first female professor of painting at the prestigious Academy of Applied Arts in Vienna. Ways of Being is a rare opportunity to see over 200 works, including paintings, films and sculptures that archive Lassnig’s intense dedication to making art, and her experience of the world. The show is set to be a riot of emotion; funny, dark, beautiful and bleak all at once – much like the world she was depicting. Ways of Being is on view at Stedelijk Museum from 6 April to 11 August 2019. Matt Antoniak is a visual artist and writer living and working in Newcastle, UK. He works mainly in painting and drawing and is a founding member of the art collective M I L K.

Fleur Sauvage Fleur Sauvage is a barrel-aged Imperial Pale Ale produced at a brewery based in Baarle-Hertog, an enclave of Belgium, south-east of the Dutch city of Breda. This complex, aromatic beer is likely to appeal to beer aficionados looking for something out of the ordinary. The name of the beer translates to ‘wild flower’ and, in common with many spring blooms, the aroma of this brew is worth lingering over. A scent of orange peel dominates the fruity nose. There is an underlying spiciness plus a hint of hops and yeast. The colour of the beer is an opaque amber and, even when poured carefully, it froths into a fluffy head. As you might expect from any beer that has spent 13 months in a barrel, Fleur Sauvage is complex. The brewers have taken their Belle Fleur IPA as the basis of this bold creation. Its mouthfeel is dry; this is a beer that tingles on the tongue thanks to its subtle effervescence. 94  |  Issue 64  |  April 2019

The flavour seems to change from an initial tartness, through a dry floral hoppiness before revealing an underlying sweetness as it rolls across the tongue. It leaves a pleasantly floral taste. The intensity and complexity may be too much for casual beer drinkers: this is one of those beers that elicits raised eyebrows of surprise before nods of approval. Each mouthful reveals more depth of flavour, so this really is a beer to savour rather than to pair with food. Fans of traditional IPAs may find this is too much like a sour. The multifaceted character of Fleur Sauvage ensures it is a beer to remember. Brewer: De Dochter van de Korenaar Alcohol content: 6.0 per cent Stuart Forster was named Journalist of the Year at the 2015, 2016 and 2019 Holland Press Awards. Five generations of his family have been actively involved in the brewing industry.