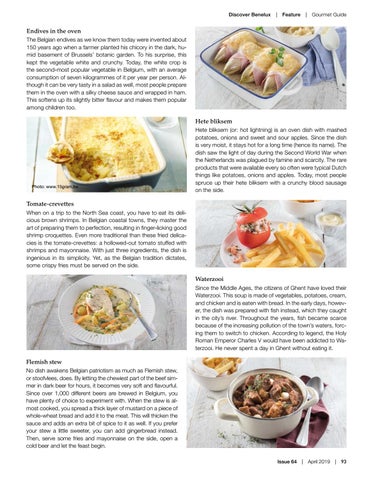 Endives in the oven The Belgian endives as we know them today were invented about 150 years ago when a farmer planted his chicory in the dark, humid basement of Brussels’ botanic garden. To his surprise, this kept the vegetable white and crunchy. Today, the white crop is the second-most popular vegetable in Belgium, with an average consumption of seven kilogrammes of it per year per person. Although it can be very tasty in a salad as well, most people prepare them in the oven with a silky cheese sauce and wrapped in ham. This softens up its slightly bitter flavour and makes them popular among children too.

Hete bliksem (or: hot lightning) is an oven dish with mashed potatoes, onions and sweet and sour apples. Since the dish is very moist, it stays hot for a long time (hence its name). The dish saw the light of day during the Second World War when the Netherlands was plagued by famine and scarcity. The rare products that were available every so often were typical Dutch things like potatoes, onions and apples. Today, most people spruce up their hete bliksem with a crunchy blood sausage on the side.

Tomate-crevettes When on a trip to the North Sea coast, you have to eat its delicious brown shrimps. In Belgian coastal towns, they master the art of preparing them to perfection, resulting in finger-licking good shrimp croquettes. Even more traditional than these fried delicacies is the tomate-crevettes: a hollowed-out tomato stuffed with shrimps and mayonnaise. With just three ingredients, the dish is ingenious in its simplicity. Yet, as the Belgian tradition dictates, some crispy fries must be served on the side.

Waterzooi Since the Middle Ages, the citizens of Ghent have loved their Waterzooi. This soup is made of vegetables, potatoes, cream, and chicken and is eaten with bread. In the early days, however, the dish was prepared with fish instead, which they caught in the city’s river. Throughout the years, fish became scarce because of the increasing pollution of the town’s waters, forcing them to switch to chicken. According to legend, the Holy Roman Emperor Charles V would have been addicted to Waterzooi. He never spent a day in Ghent without eating it.

Flemish stew No dish awakens Belgian patriotism as much as Flemish stew, or stoofvlees, does. By letting the chewiest part of the beef simmer in dark beer for hours, it becomes very soft and flavourful. Since over 1,000 different beers are brewed in Belgium, you have plenty of choice to experiment with. When the stew is almost cooked, you spread a thick layer of mustard on a piece of whole-wheat bread and add it to the meat. This will thicken the sauce and adds an extra bit of spice to it as well. If you prefer your stew a little sweeter, you can add gingerbread instead. Then, serve some fries and mayonnaise on the side, open a cold beer and let the feast begin. Issue 64  |  April 2019  |  93