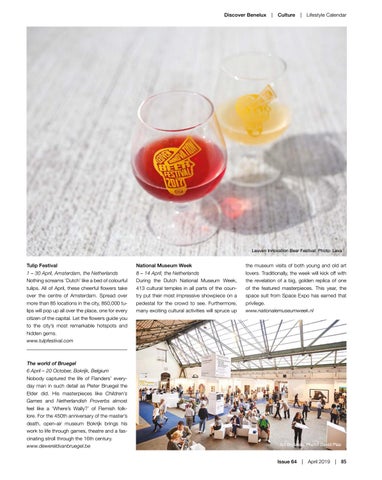 Tulip Festival 1 – 30 April, Amsterdam, the Netherlands Nothing screams ‘Dutch’ like a bed of colourful tulips. All of April, these cheerful flowers take over the centre of Amsterdam. Spread over more than 85 locations in the city, 850,000 tulips will pop up all over the place, one for every citizen of the capital. Let the flowers guide you to the city’s most remarkable hotspots and hidden gems. www.tulpfestival.com

The world of Bruegel 6 April – 20 October, Bokrijk, Belgium Nobody captured the life of Flanders’ everyday man in such detail as Pieter Bruegel the Elder did. His masterpieces like Children’s Games and Netherlandish Proverbs almost feel like a ‘Where’s Wally?’ of Flemish folklore. For the 450th anniversary of the master’s death, open-air museum Bokrijk brings his work to life through games, theatre and a fascinating stroll through the 16th century. www.dewereldvanbruegel.be

National Museum Week 8 – 14 April, the Netherlands During the Dutch National Museum Week, 413 cultural temples in all parts of the country put their most impressive showpiece on a pedestal for the crowd to see. Furthermore, many exciting cultural activities will spruce up

the museum visits of both young and old art lovers. Traditionally, the week will kick off with the revelation of a big, golden replica of one of the featured masterpieces. This year, the space suit from Space Expo has earned that privilege. www.nationalemuseumweek.nl