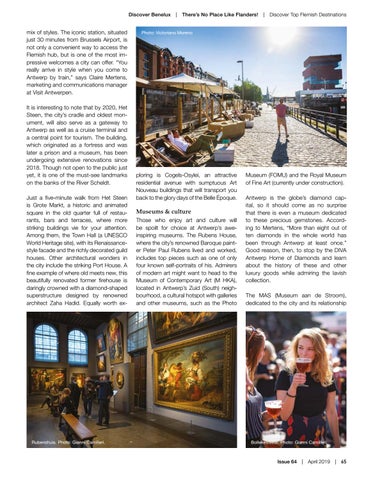 mix of styles. The iconic station, situated just 30 minutes from Brussels Airport, is not only a convenient way to access the Flemish hub, but is one of the most impressive welcomes a city can offer. “You really arrive in style when you come to Antwerp by train,” says Claire Mertens, marketing and communications manager at Visit Antwerpen. It is interesting to note that by 2020, Het Steen, the city’s cradle and oldest monument, will also serve as a gateway to Antwerp as well as a cruise terminal and a central point for tourism. The building, which originated as a fortress and was later a prison and a museum, has been undergoing extensive renovations since 2018. Though not open to the public just yet, it is one of the must-see landmarks on the banks of the River Scheldt. Just a five-minute walk from Het Steen is Grote Markt, a historic and animated square in the old quarter full of restaurants, bars and terraces, where more striking buildings vie for your attention. Among them, the Town Hall (a UNESCO World Heritage site), with its Renaissancestyle facade and the richly decorated guild houses. Other architectural wonders in the city include the striking Port House. A fine example of where old meets new, this beautifully renovated former firehouse is daringly crowned with a diamond-shaped superstructure designed by renowned architect Zaha Hadid. Equally worth ex-

ploring is Cogels-Osylei, an attractive residential avenue with sumptuous Art Nouveau buildings that will transport you back to the glory days of the Belle Époque.

Museums &amp; culture Those who enjoy art and culture will be spoilt for choice at Antwerp’s aweinspiring museums. The Rubens House, where the city’s renowned Baroque painter Peter Paul Rubens lived and worked, includes top pieces such as one of only four known self-portraits of his. Admirers of modern art might want to head to the Museum of Contemporary Art (M HKA), located in Antwerp’s Zuid (South) neighbourhood, a cultural hotspot with galleries and other museums, such as the Photo

Museum (FOMU) and the Royal Museum of Fine Art (currently under construction). Antwerp is the globe’s diamond capital, so it should come as no surprise that there is even a museum dedicated to these precious gemstones. According to Mertens, “More than eight out of ten diamonds in the whole world has been through Antwerp at least once.” Good reason, then, to stop by the DIVA Antwerp Home of Diamonds and learn about the history of these and other luxury goods while admiring the lavish collection. The MAS (Museum aan de Stroom), dedicated to the city and its relationship