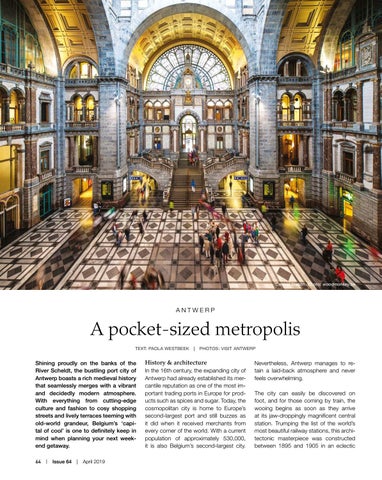 Shining proudly on the banks of the River Scheldt, the bustling port city of Antwerp boasts a rich medieval history that seamlessly merges with a vibrant and decidedly modern atmosphere. With everything from cutting-edge culture and fashion to cosy shopping streets and lively terraces teeming with old-world grandeur, Belgium’s ‘capital of cool’ is one to definitely keep in mind when planning your next weekend getaway. 64  |  Issue 64  |  April 2019

History &amp; architecture In the 16th century, the expanding city of Antwerp had already established its mercantile reputation as one of the most important trading ports in Europe for products such as spices and sugar. Today, the cosmopolitan city is home to Europe’s second-largest port and still buzzes as it did when it received merchants from every corner of the world. With a current population of approximately 530,000, it is also Belgium’s second-largest city.

Nevertheless, Antwerp manages to retain a laid-back atmosphere and never feels overwhelming. The city can easily be discovered on foot, and for those coming by train, the wooing begins as soon as they arrive at its jaw-droppingly magnificent central station. Trumping the list of the world’s most beautiful railway stations, this architectonic masterpiece was constructed between 1895 and 1905 in an eclectic