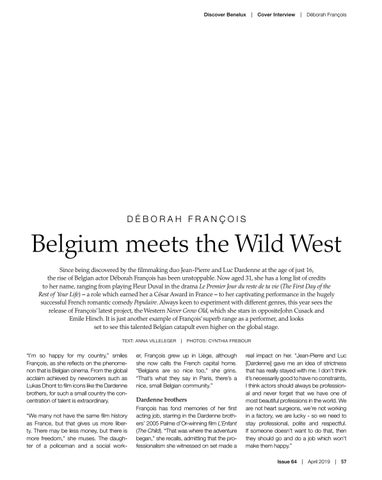 Belgium meets the Wild West Since being discovered by the filmmaking duo Jean-Pierre and Luc Dardenne at the age of just 16, the rise of Belgian actor Déborah François has been unstoppable. Now aged 31, she has a long list of credits to her name, ranging from playing Fleur Duval in the drama Le Premier Jour du reste de ta vie (The First Day of the Rest of Your Life) – a role which earned her a César Award in France – to her captivating performance in the hugely successful French romantic comedy Populaire. Always keen to experiment with different genres, this year sees the release of François’ latest project, the Western Never Grow Old, which she stars in oppositeJohn Cusack and Emile Hirsch. It is just another example of François’ superb range as a performer, and looks set to see this talented Belgian catapult even higher on the global stage. TEXT: ANNA VILLELEGER  |  PHOTOS: CYNTHIA FREBOUR

er, François grew up in Liège, although she now calls the French capital home. “Belgians are so nice too,” she grins. “That’s what they say in Paris, there’s a nice, small Belgian community.”

“I’m so happy for my country,” smiles François, as she reflects on the phenomenon that is Belgian cinema. From the global acclaim achieved by newcomers such as Lukas Dhont to film icons like the Dardenne brothers, for such a small country the concentration of talent is extraordinary.

“We many not have the same film history as France, but that gives us more liberty. There may be less money, but there is more freedom,” she muses. The daughter of a policeman and a social work-

François has fond memories of her first acting job, starring in the Dardenne brothers’ 2005 Palme d’Or-winning film L’Enfant (The Child). “That was where the adventure began,” she recalls, admitting that the professionalism she witnessed on set made a

real impact on her. “Jean-Pierre and Luc [Dardenne] gave me an idea of strictness that has really stayed with me. I don’t think it’s necessarily good to have no constraints, I think actors should always be professional and never forget that we have one of most beautiful professions in the world. We are not heart surgeons, we’re not working in a factory, we are lucky - so we need to stay professional, polite and respectful. If someone doesn’t want to do that, then they should go and do a job which won’t make them happy.” Issue 64  |  April 2019  |  57