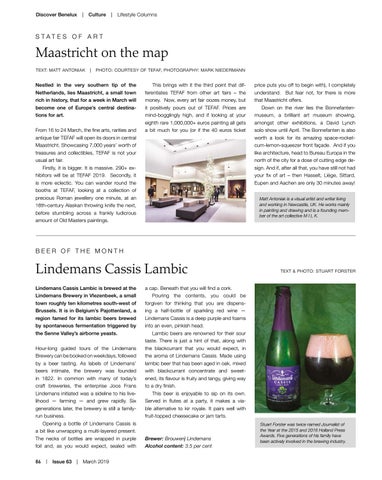 Nestled in the very southern tip of the Netherlands, lies Maastricht, a small town rich in history, that for a week in March will become one of Europe’s central destinations for art. From 16 to 24 March, the fine arts, rarities and antique fair TEFAF will open its doors in central Maastricht. Showcasing 7,000 years’ worth of treasures and collectibles, TEFAF is not your usual art fair. Firstly, it is bigger. It is massive. 290+ exhibitors will be at TEFAF 2019. Secondly, it is more eclectic. You can wander round the booths at TEFAF, looking at a collection of precious Roman jewellery one minute, at an 18th-century Alaskan throwing knife the next, before stumbling across a frankly ludicrous amount of Old Masters paintings.

This brings with it the third point that differentiates TEFAF from other art fairs – the money. Now, every art fair oozes money, but it positively pours out of TEFAF. Prices are mind-bogglingly high, and if looking at your eighth rare 1,000,000+ euros painting all gets a bit much for you (or if the 40 euros ticket

price puts you off to begin with), I completely understand. But fear not, for there is more that Maastricht offers. Down on the river lies the Bonnefantenmuseum, a brilliant art museum showing, amongst other exhibitions, a David Lynch solo show until April. The Bonnefanten is also worth a look for its amazing space-rocketcum-lemon-squeezer front façade. And if you like architecture, head to Bureau Europa in the north of the city for a dose of cutting edge design. And if, after all that, you have still not had your fix of art – then Hasselt, Liège, Sittard, Eupen and Aachen are only 30 minutes away! Matt Antoniak is a visual artist and writer living and working in Newcastle, UK. He works mainly in painting and drawing and is a founding member of the art collective M I L K.

Lindemans Cassis Lambic Lindemans Cassis Lambic is brewed at the Lindemans Brewery in Vlezenbeek, a small town roughly ten kilometres south-west of Brussels. It is in Belgium’s Pajottenland, a region famed for its lambic beers brewed by spontaneous fermentation triggered by the Senne Valley’s airborne yeasts. Hour-long guided tours of the Lindemans Brewery can be booked on weekdays, followed by a beer tasting. As labels of Lindemans’ beers intimate, the brewery was founded in 1822. In common with many of today’s craft breweries, the enterprise Joos Frans Lindemans initiated was a sideline to his livelihood — farming — and grew rapidly. Six generations later, the brewery is still a familyrun business. Opening a bottle of Lindemans Cassis is a bit like unwrapping a multi-layered present. The necks of bottles are wrapped in purple foil and, as you would expect, sealed with 86  |  Issue 63  |  March 2019

a cap. Beneath that you will find a cork. Pouring the contents, you could be forgiven for thinking that you are dispensing a half-bottle of sparkling red wine — Lindemans Cassis is a deep purple and foams into an even, pinkish head. Lambic beers are renowned for their sour taste. There is just a hint of that, along with the blackcurrant that you would expect, in the aroma of Lindemans Cassis. Made using lambic beer that has been aged in oak, mixed with blackcurrant concentrate and sweetened, its flavour is fruity and tangy, giving way to a dry finish. This beer is enjoyable to sip on its own. Served in flutes at a party, it makes a viable alternative to kir royale. It pairs well with fruit-topped cheesecake or jam tarts.