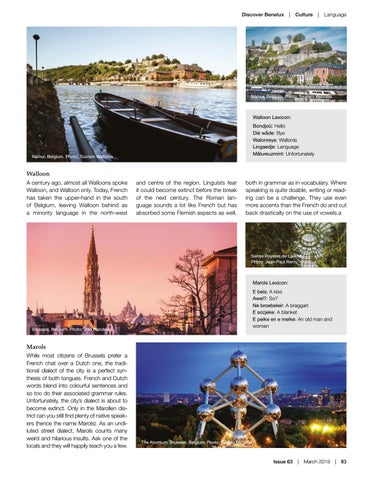 Walloon A century ago, almost all Walloons spoke Walloon, and Walloon only. Today, French has taken the upper-hand in the south of Belgium, leaving Walloon behind as a minority language in the north-west

and centre of the region. Linguists fear it could become extinct before the break of the next century. The Roman language sounds a lot like French but has absorbed some Flemish aspects as well,

both in grammar as in vocabulary. Where speaking is quite doable, writing or reading can be a challenge. They use even more accents than the French do and cut back drastically on the use of vowels.a

Marols While most citizens of Brussels prefer a French chat over a Dutch one, the traditional dialect of the city is a perfect synthesis of both tongues. French and Dutch words blend into colourful sentences and so too do their associated grammar rules. Unfortunately, the city’s dialect is about to become extinct. Only in the Marollen district can you still find plenty of native speakers (hence the name Marols). As an undiluted street dialect, Marols counts many weird and hilarious insults. Ask one of the locals and they will happily teach you a few.