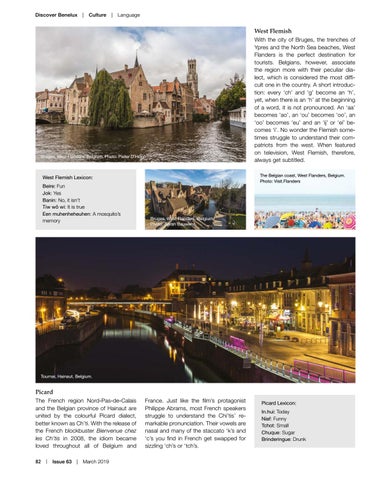 West Flemish With the city of Bruges, the trenches of Ypres and the North Sea beaches, West Flanders is the perfect destination for tourists. Belgians, however, associate the region more with their peculiar dialect, which is considered the most difficult one in the country. A short introduction: every ‘ch’ and ‘g’ become an ‘h’, yet, when there is an ‘h’ at the beginning of a word, it is not pronounced. An ‘aa’ becomes ‘ao’, an ‘ou’ becomes ‘oo’, an ‘oo’ becomes ‘eu’ and an ‘ij’ or ‘ei’ becomes ‘i’. No wonder the Flemish sometimes struggle to understand their compatriots from the west. When featured on television, West Flemish, therefore, always get subtitled.

Picard The French region Nord-Pas-de-Calais and the Belgian province of Hainaut are united by the colourful Picard dialect, better known as Ch’ti. With the release of the French blockbuster Bienvenue chez les Ch’tis in 2008, the idiom became loved throughout all of Belgium and 82  |  Issue 63  |  March 2019

France. Just like the film’s protagonist Philippe Abrams, most French speakers struggle to understand the Chi’tis’ remarkable pronunciation. Their vowels are nasal and many of the staccato ‘k’s and ‘c’s you find in French get swapped for sizzling ‘ch’s or ‘tch’s.