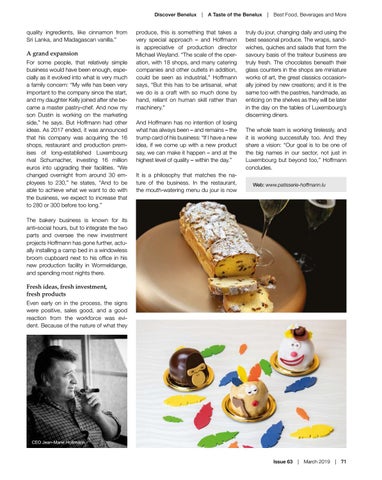 quality ingredients, like cinnamon from Sri Lanka, and Madagascan vanilla.”

A grand expansion For some people, that relatively simple business would have been enough, especially as it evolved into what is very much a family concern: “My wife has been very important to the company since the start, and my daughter Kelly joined after she became a master pastry-chef. And now my son Dustin is working on the marketing side,” he says. But Hoffmann had other ideas. As 2017 ended, it was announced that his company was acquiring the 16 shops, restaurant and production premises of long-established Luxembourg rival Schumacher, investing 16 million euros into upgrading their facilities. “We changed overnight from around 30 employees to 230,” he states, “And to be able to achieve what we want to do with the business, we expect to increase that to 280 or 300 before too long.”

produce, this is something that takes a very special approach – and Hoffmann is appreciative of production director Michael Weyland. “The scale of the operation, with 18 shops, and many catering companies and other outlets in addition, could be seen as industrial,” Hoffmann says, “But this has to be artisanal, what we do is a craft with so much done by hand, reliant on human skill rather than machinery.” And Hoffmann has no intention of losing what has always been – and remains – the trump card of his business: “If I have a new idea, if we come up with a new product say, we can make it happen – and at the highest level of quality – within the day.” It is a philosophy that matches the nature of the business. In the restaurant, the mouth-watering menu du jour is now

truly du jour, changing daily and using the best seasonal produce. The wraps, sandwiches, quiches and salads that form the savoury basis of the traiteur business are truly fresh. The chocolates beneath their glass counters in the shops are miniature works of art, the great classics occasionally joined by new creations; and it is the same too with the pastries, handmade, as enticing on the shelves as they will be later in the day on the tables of Luxembourg’s discerning diners. The whole team is working tirelessly, and it is working successfully too. And they share a vision: “Our goal is to be one of the big names in our sector, not just in Luxembourg but beyond too,” Hoffmann concludes. Web: www.patisserie-hoffmann.lu

The bakery business is known for its anti-social hours, but to integrate the two parts and oversee the new investment projects Hoffmann has gone further, actually installing a camp bed in a windowless broom cupboard next to his office in his new production facility in Wormeldange, and spending most nights there.

Fresh ideas, fresh investment, fresh products Even early on in the process, the signs were positive, sales good, and a good reaction from the workforce was evident. Because of the nature of what they