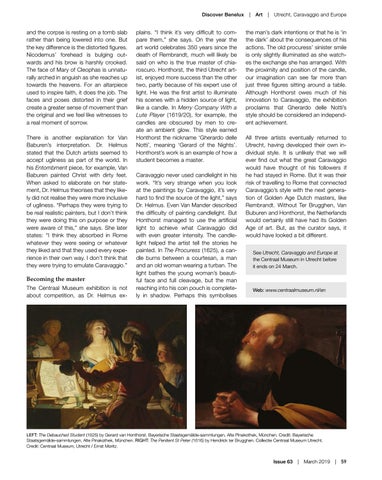 and the corpse is resting on a tomb slab rather than being lowered into one. But the key difference is the distorted figures. Nicodemus’ forehead is bulging outwards and his brow is harshly crooked. The face of Mary of Cleophas is unnaturally arched in anguish as she reaches up towards the heavens. For an altarpiece used to inspire faith, it does the job. The faces and poses distorted in their grief create a greater sense of movement than the original and we feel like witnesses to a real moment of sorrow. There is another explanation for Van Baburen’s interpretation. Dr. Helmus stated that the Dutch artists seemed to accept ugliness as part of the world. In his Entombment piece, for example, Van Baburen painted Christ with dirty feet. When asked to elaborate on her statement, Dr. Helmus theorises that they likely did not realise they were more inclusive of ugliness. “Perhaps they were trying to be real realistic painters, but I don’t think they were doing this on purpose or they were aware of this,” she says. She later states: “I think they absorbed in Rome whatever they were seeing or whatever they liked and that they used every experience in their own way. I don’t think that they were trying to emulate Caravaggio.”

Becoming the master The Centraal Museum exhibition is not about competition, as Dr. Helmus ex-

plains. “I think it’s very difficult to compare them,” she says. On the year the art world celebrates 350 years since the death of Rembrandt, much will likely be said on who is the true master of chiaroscuro. Honthorst, the third Utrecht artist, enjoyed more success than the other two, partly because of his expert use of light. He was the first artist to illuminate his scenes with a hidden source of light, like a candle. In Merry Company With a Lute Player (1619/20), for example, the candles are obscured by men to create an ambient glow. This style earned Honthorst the nickname ‘Gherardo delle Notti’, meaning ‘Gerard of the Nights’. Honthorst’s work is an example of how a student becomes a master. Caravaggio never used candlelight in his work. “It’s very strange when you look at the paintings by Caravaggio, it’s very hard to find the source of the light,” says Dr. Helmus. Even Van Mander described the difficulty of painting candlelight. But Honthorst managed to use the artificial light to achieve what Caravaggio did with even greater intensity. The candlelight helped the artist tell the stories he painted. In The Procuress (1625), a candle burns between a courtesan, a man and an old woman wearing a turban. The light bathes the young woman’s beautiful face and full cleavage, but the man reaching into his coin pouch is completely in shadow. Perhaps this symbolises

the man’s dark intentions or that he is ‘in the dark’ about the consequences of his actions. The old procuress’ sinister smile is only slightly illuminated as she watches the exchange she has arranged. With the proximity and position of the candle, our imagination can see far more than just three figures sitting around a table. Although Honthorst owes much of his innovation to Caravaggio, the exhibition proclaims that Gherardo delle Notti’s style should be considered an independent achievement. All three artists eventually returned to Utrecht, having developed their own individual style. It is unlikely that we will ever find out what the great Caravaggio would have thought of his followers if he had stayed in Rome. But it was their risk of travelling to Rome that connected Caravaggio’s style with the next generation of Golden Age Dutch masters, like Rembrandt. Without Ter Brugghen, Van Buburen and Honthorst, the Netherlands would certainly still have had its Golden Age of art. But, as the curator says, it would have looked a bit different. See Utrecht, Caravaggio and Europe at the Centraal Museum in Utrecht before it ends on 24 March.