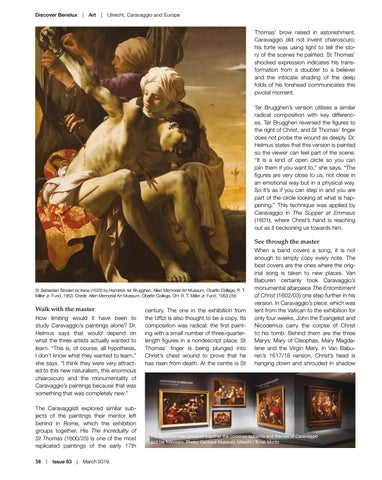 Thomas’ brow raised in astonishment. Caravaggio did not invent chiaroscuro; his forte was using light to tell the story of the scenes he painted. St Thomas’ shocked expression indicates his transformation from a doubter to a believer and the intricate shading of the deep folds of his forehead communicates this pivotal moment. Ter Brugghen’s version utilises a similar radical composition with key differences. Ter Brugghen reversed the figures to the right of Christ, and St Thomas’ finger does not probe the wound as deeply. Dr. Helmus states that this version is painted so the viewer can feel part of the scene. “It is a kind of open circle so you can join them if you want to,” she says. “The figures are very close to us, not close in an emotional way but in a physical way. So it’s as if you can step in and you are part of the circle looking at what is happening.” This technique was applied by Caravaggio in The Supper at Emmaus (1601), where Christ’s hand is reaching out as if beckoning us towards him.

See through the master

Walk with the master How limiting would it have been to study Caravaggio’s paintings alone? Dr. Helmus says that would depend on what the three artists actually wanted to learn. “This is, of course, all hypothesis, I don’t know what they wanted to learn,” she says. “I think they were very attracted to this new naturalism, this enormous chiaroscuro and the monumentality of Caravaggio’s paintings because that was something that was completely new.” The Caravaggisti explored similar subjects of the paintings their mentor left behind in Rome, which the exhibition groups together. His The Incredulity of St Thomas (1600/25) is one of the most replicated paintings of the early 17th 58  |  Issue 63  |  March 2019

century. The one in the exhibition from the Uffizi is also thought to be a copy. Its composition was radical: the first painting with a small number of three-quarterlength figures in a nondescript place. St Thomas’ finger is being plunged into Christ’s chest wound to prove that he has risen from death. At the centre is St

When a band covers a song, it is not enough to simply copy every note. The best covers are the ones where the original song is taken to new places. Van Baburen certainly took Caravaggio’s monumental altarpiece The Entombment of Christ (1602/03) one step further in his version. In Caravaggio’s piece, which was lent from the Vatican to the exhibition for only four weeks, John the Evangelist and Nicodemus carry the corpse of Christ to his tomb. Behind them are the three Marys: Mary of Cleophas, Mary Magdalene and the Virgin Mary. In Van Baburen’s 1617/18 version, Christ’s head is hanging down and shrouded in shadow

The exhibition has grouped together the common subjects and themes of Caravaggio and his followers. Photo: Centraal Museum, Utrecht / Ernst Moritz