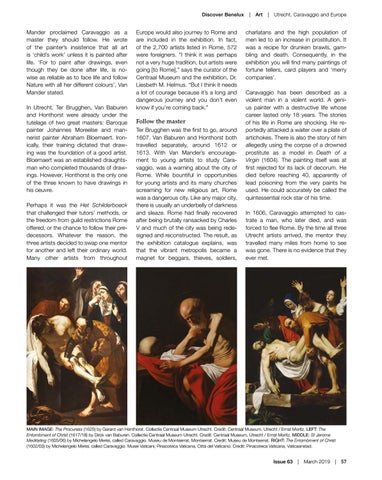 Mander proclaimed Caravaggio as a master they should follow. He wrote of the painter’s insistence that all art is ‘child’s work’ unless it is painted after life. ‘For to paint after drawings, even though they be done after life, is nowise as reliable as to face life and follow Nature with all her different colours’, Van Mander stated. In Utrecht, Ter Brugghen, Van Baburen and Honthorst were already under the tutelage of two great masters: Baroque painter Johannes Moreelse and mannerist painter Abraham Bloemaert. Ironically, their training dictated that drawing was the foundation of a good artist. Bloemaert was an established draughtsman who completed thousands of drawings. However, Honthorst is the only one of the three known to have drawings in his oeuvre. Perhaps it was the Het Schilderboeck that challenged their tutors’ methods, or the freedom from guild restrictions Rome offered, or the chance to follow their predecessors. Whatever the reason, the three artists decided to swap one mentor for another and left their ordinary world. Many other artists from throughout

Europe would also journey to Rome and are included in the exhibition. In fact, of the 2,700 artists listed in Rome, 572 were foreigners. “I think it was perhaps not a very huge tradition, but artists were going [to Rome],” says the curator of the Centraal Museum and the exhibition, Dr. Liesbeth M. Helmus. “But I think it needs a lot of courage because it’s a long and dangerous journey and you don’t even know if you’re coming back.”

Follow the master Ter Brugghen was the first to go, around 1607. Van Baburen and Honthorst both travelled separately, around 1612 or 1613. With Van Mander’s encouragement to young artists to study Caravaggio, was a warning about the city of Rome. While bountiful in opportunities for young artists and its many churches screaming for new religious art, Rome was a dangerous city. Like any major city, there is usually an underbelly of darkness and sleaze. Rome had finally recovered after being brutally ransacked by Charles V and much of the city was being redesigned and reconstructed. The result, as the exhibition catalogue explains, was that the vibrant metropolis became a magnet for beggars, thieves, soldiers,

charlatans and the high population of men led to an increase in prostitution. It was a recipe for drunken brawls, gambling and death. Consequently, in the exhibition you will find many paintings of fortune tellers, card players and ‘merry companies’. Caravaggio has been described as a violent man in a violent world. A genius painter with a destructive life whose career lasted only 18 years. The stories of his life in Rome are shocking. He reportedly attacked a waiter over a plate of artichokes. There is also the story of him allegedly using the corpse of a drowned prostitute as a model in Death of a Virgin (1604). The painting itself was at first rejected for its lack of decorum. He died before reaching 40, apparently of lead poisoning from the very paints he used. He could accurately be called the quintessential rock star of his time. In 1606, Caravaggio attempted to castrate a man, who later died, and was forced to flee Rome. By the time all three Utrecht artists arrived, the mentor they travelled many miles from home to see was gone. There is no evidence that they ever met.