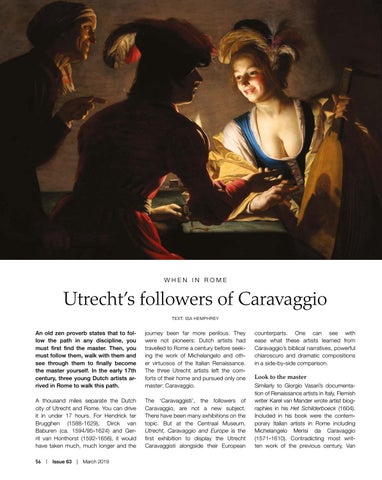 An old zen proverb states that to follow the path in any discipline, you must first find the master. Then, you must follow them, walk with them and see through them to finally become the master yourself. In the early 17th century, three young Dutch artists arrived in Rome to walk this path.

journey been far more perilous. They were not pioneers: Dutch artists had travelled to Rome a century before seeking the work of Michelangelo and other virtuosos of the Italian Renaissance. The three Utrecht artists left the comforts of their home and pursued only one master: Caravaggio.

The ‘Caravaggisti’, the followers of Caravaggio, are not a new subject. There have been many exhibitions on the topic. But at the Centraal Museum, Utrecht, Caravaggio and Europe is the first exhibition to display the Utrecht Caravaggisti alongside their European

counterparts. One can see with ease what these artists learned from Caravaggio’s biblical narratives, powerful chiaroscuro and dramatic compositions in a side-by-side comparison.

Look to the master Similarly to Giorgio Vasari’s documentation of Renaissance artists in Italy, Flemish writer Karel van Mander wrote artist biographies in his Het Schilderboeck (1604). Included in his book were the contemporary Italian artists in Rome including Michelangelo Merisi da Caravaggio (1571-1610). Contradicting most written work of the previous century, Van