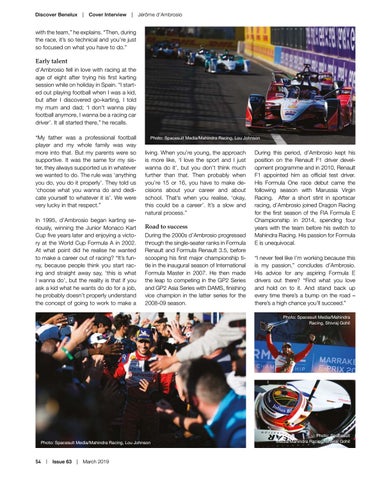 with the team,” he explains. “Then, during the race, it’s so technical and you’re just so focused on what you have to do.”

Early talent d’Ambrosio fell in love with racing at the age of eight after trying his first karting session while on holiday in Spain. “I started out playing football when I was a kid, but after I discovered go-karting, I told my mum and dad; ‘I don’t wanna play football anymore, I wanna be a racing car driver’. It all started there,” he recalls. “My father was a professional football player and my whole family was way more into that. But my parents were so supportive. It was the same for my sister, they always supported us in whatever we wanted to do. The rule was ‘anything you do, you do it properly’. They told us ‘choose what you wanna do and dedicate yourself to whatever it is’. We were very lucky in that respect.” In 1995, d’Ambrosio began karting seriously, winning the Junior Monaco Kart Cup five years later and enjoying a victory at the World Cup Formula A in 2002. At what point did he realise he wanted to make a career out of racing? “It’s funny, because people think you start racing and straight away say, ‘this is what I wanna do’, but the reality is that if you ask a kid what he wants do do for a job, he probably doesn’t properly understand the concept of going to work to make a

living. When you’re young, the approach is more like, ‘I love the sport and I just wanna do it’, but you don’t think much further than that. Then probably when you’re 15 or 16, you have to make decisions about your career and about school. That’s when you realise, ‘okay, this could be a career’. It’s a slow and natural process.”

Road to success During the 2000s d’Ambrosio progressed through the single-seater ranks in Formula Renault and Formula Renault 3.5, before scooping his first major championship title in the inaugural season of International Formula Master in 2007. He then made the leap to competing in the GP2 Series and GP2 Asia Series with DAMS, finishing vice champion in the latter series for the 2008-09 season.

During this period, d’Ambrosio kept his position on the Renault F1 driver development programme and in 2010, Renault F1 appointed him as official test driver. His Formula One race debut came the following season with Marussia Virgin Racing. After a short stint in sportscar racing, d’Ambrosio joined Dragon Racing for the first season of the FIA Formula E Championship in 2014, spending four years with the team before his switch to Mahindra Racing. His passion for Formula E is unequivocal. “I never feel like I’m working because this is my passion,” concludes d’Ambrosio. His advice for any aspiring Formula E drivers out there? “Find what you love and hold on to it. And stand back up every time there’s a bump on the road – there’s a high chance you’ll succeed.” Photo: Spacesuit Media/Mahindra Racing, Shivraj Gohil