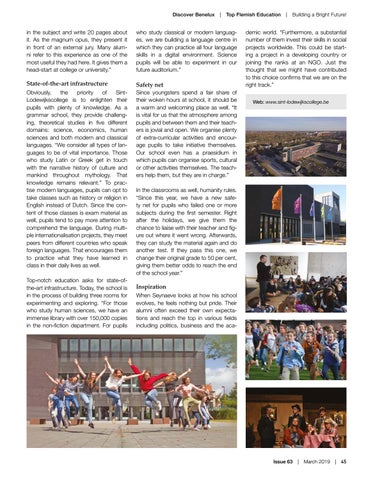 in the subject and write 20 pages about it. As the magnum opus, they present it in front of an external jury. Many alumni refer to this experience as one of the most useful they had here. It gives them a head-start at college or university.”

who study classical or modern languages, we are building a language centre in which they can practice all four language skills in a digital environment. Science pupils will be able to experiment in our future auditorium.”

Obviously, the priority of SintLodewijkscollege is to enlighten their pupils with plenty of knowledge. As a grammar school, they provide challenging, theoretical studies in five different domains: science, economics, human sciences and both modern and classical languages. “We consider all types of languages to be of vital importance. Those who study Latin or Greek get in touch with the narrative history of culture and mankind throughout mythology. That knowledge remains relevant.” To practise modern languages, pupils can opt to take classes such as history or religion in English instead of Dutch. Since the content of those classes is exam material as well, pupils tend to pay more attention to comprehend the language. During multiple internationalisation projects, they meet peers from different countries who speak foreign languages. That encourages them to practice what they have learned in class in their daily lives as well.

Since youngsters spend a fair share of their woken hours at school, it should be a warm and welcoming place as well. “It is vital for us that the atmosphere among pupils and between them and their teachers is jovial and open. We organise plenty of extra-curricular activities and encourage pupils to take initiative themselves. Our school even has a praesidium in which pupils can organise sports, cultural or other activities themselves. The teachers help them, but they are in charge.”

Top-notch education asks for state-ofthe-art infrastructure. Today, the school is in the process of building three rooms for experimenting and exploring. “For those who study human sciences, we have an immense library with over 150,000 copies in the non-fiction department. For pupils

demic world. “Furthermore, a substantial number of them invest their skills in social projects worldwide. This could be starting a project in a developing country or joining the ranks at an NGO. Just the thought that we might have contributed to this choice confirms that we are on the right track.” Web: www.sint-lodewijkscollege.be

In the classrooms as well, humanity rules. “Since this year, we have a new safety net for pupils who failed one or more subjects during the first semester. Right after the holidays, we give them the chance to liaise with their teacher and figure out where it went wrong. Afterwards, they can study the material again and do another test. If they pass this one, we change their original grade to 50 per cent, giving them better odds to reach the end of the school year.”

Inspiration When Seynaeve looks at how his school evolves, he feels nothing but pride. Their alumni often exceed their own expectations and reach the top in various fields including politics, business and the aca-