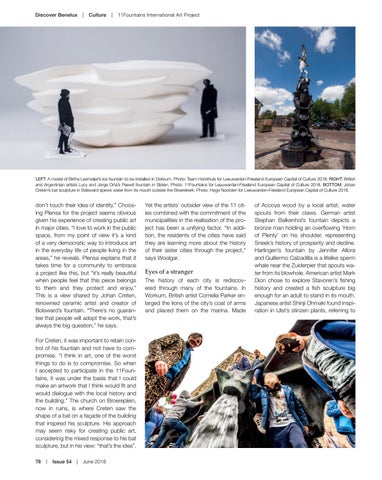 don’t touch their idea of identity.” Choosing Plensa for the project seems obvious given his experience of creating public art in major cities. “I love to work in the public space, from my point of view it’s a kind of a very democratic way to introduce art in the everyday life of people living in the areas,” he reveals. Plensa explains that it takes time for a community to embrace a project like this, but “it’s really beautiful when people feel that this piece belongs to them and they protect and enjoy.” This is a view shared by Johan Creten, renowned ceramic artist and creator of Bolsward’s fountain. “There’s no guarantee that people will adopt the work, that’s always the big question,” he says. For Creten, it was important to retain control of his fountain and not have to compromise. “I think in art, one of the worst things to do is to compromise. So when I accepted to participate in the 11Fountains, it was under the basis that I could make an artwork that I think would fit and would dialogue with the local history and the building.” The church on Broereplein, now in ruins, is where Creten saw the shape of a bat on a façade of the building that inspired his sculpture. His approach may seem risky for creating public art, considering the mixed response to his bat sculpture, but in his view: “that’s the idea”. 78  |  Issue 54  |  June 2018

Yet the artists’ outsider view of the 11 cities combined with the commitment of the municipalities in the realisation of the project has been a unifying factor. “In addition, the residents of the cities have said they are learning more about the history of their sister cities through the project,” says Woolgar.

Eyes of a stranger The history of each city is rediscovered through many of the fountains. In Workum, British artist Cornelia Parker enlarged the lions of the city’s coat of arms and placed them on the marina. Made

of Accoya wood by a local artist, water spouts from their claws. German artist Stephan Balkenhol’s fountain depicts a bronze man holding an overflowing ‘Horn of Plenty’ on his shoulder, representing Sneek’s history of prosperity and decline. Harlingen’s fountain by Jennifer Allora and Guillermo Calzadilla is a lifelike sperm whale near the Zuiderpier that spouts water from its blowhole. American artist Mark Dion chose to explore Stavoren’s fishing history and created a fish sculpture big enough for an adult to stand in its mouth. Japanese artist Shinji Ohmaki found inspiration in IJlst’s stinzen plants, referring to