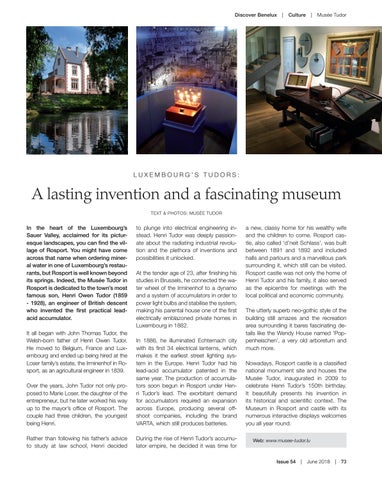 In the heart of the Luxembourg’s Sauer Valley, acclaimed for its picturesque landscapes, you can find the village of Rosport. You might have come across that name when ordering mineral water in one of Luxembourg’s restaurants, but Rosport is well known beyond its springs. Indeed, the Musée Tudor in Rosport is dedicated to the town’s most famous son, Henri Owen Tudor (1859 - 1928), an engineer of British descent who invented the first practical leadacid accumulator. It all began with John Thomas Tudor, the Welsh-born father of Henri Owen Tudor. He moved to Belgium, France and Luxembourg and ended up being hired at the Loser family’s estate, the Irminenhof in Rosport, as an agricultural engineer in 1839.

to plunge into electrical engineering instead. Henri Tudor was deeply passionate about the radiating industrial revolution and the plethora of inventions and possibilities it unlocked. At the tender age of 23, after finishing his studies in Brussels, he connected the water wheel of the Irminenhof to a dynamo and a system of accumulators in order to power light bulbs and stabilise the system, making his parental house one of the first electrically emblazoned private homes in Luxembourg in 1882.

Over the years, John Tudor not only proposed to Marie Loser, the daughter of the entrepreneur, but he later worked his way up to the mayor’s office of Rosport. The couple had three children, the youngest being Henri.

In 1886, he illuminated Echternach city with its first 34 electrical lanterns, which makes it the earliest street lighting system in the Europe. Henri Tudor had his lead-acid accumulator patented in the same year. The production of accumulators soon begun in Rosport under Henri Tudor’s lead. The exorbitant demand for accumulators required an expansion across Europe, producing several offshoot companies, including the brand VARTA, which still produces batteries.

Rather than following his father’s advice to study at law school, Henri decided

During the rise of Henri Tudor’s accumulator empire, he decided it was time for

a new, classy home for his wealthy wife and the children to come. Rosport castle, also called ‘d’neit Schlass’, was built between 1891 and 1892 and included halls and parlours and a marvellous park surrounding it, which still can be visited. Rosport castle was not only the home of Henri Tudor and his family, it also served as the epicentre for meetings with the local political and economic community. The utterly superb neo-gothic style of the building still amazes and the recreation area surrounding it bares fascinating details like the Wendy House named ‘Poppenheischen’, a very old arboretum and much more. Nowadays, Rosport castle is a classified national monument site and houses the Musée Tudor, inaugurated in 2009 to celebrate Henri Tudor’s 150th birthday. It beautifully presents his invention in its historical and scientific context. The Museum in Rosport and castle with its numerous interactive displays welcomes you all year round. Web: www.musee-tudor.lu