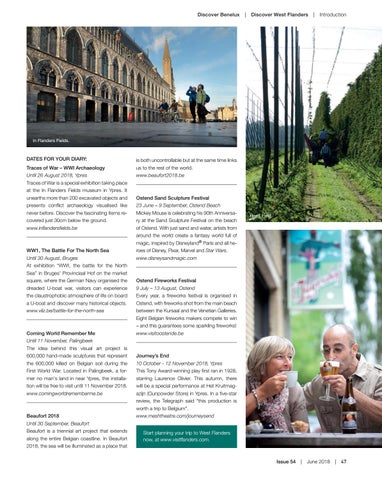 DATES FOR YOUR DIARY: Traces of War – WWI Archaeology Until 26 August 2018, Ypres Traces of War is a special exhibition taking place at the In Flanders Fields museum in Ypres. It unearths more than 200 excavated objects and presents conflict archaeology visualised like never before. Discover the fascinating items recovered just 30cm below the ground. www.inflandersfields.be

WW1, The Battle For The North Sea Until 30 August, Bruges At exhibition “WWI, the battle for the North Sea” in Bruges&#39; Provinciaal Hof on the market square, where the German Navy organised the dreaded U-boat war, visitors can experience the claustrophobic atmosphere of life on board a U-boat and discover many historical objects. www.vliz.be/battle-for-the-north-sea

Coming World Remember Me Until 11 November, Palingbeek The idea behind this visual art project is 600,000 hand-made sculptures that represent the 600,000 killed on Belgian soil during the First World War. Located in Palingbeek, a former no man&#39;s land in near Ypres, the installation will be free to visit until 11 November 2018. www.comingworldrememberme.be

Beaufort 2018 Until 30 September, Beaufort Beaufort is a triennial art project that extends along the entire Belgian coastline. In Beaufort 2018, the sea will be illuminated as a place that

is both uncontrollable but at the same time links us to the rest of the world. www.beaufort2018.be

Ostend Sand Sculpture Festival 23 June – 9 September, Ostend Beach Mickey Mouse is celebrating his 90th Anniversary at the Sand Sculpture Festival on the beach of Ostend. With just sand and water, artists from around the world create a fantasy world full of magic, inspired by Disneyland® Paris and all heroes of Disney, Pixar, Marvel and Star Wars. www.disneysandmagic.com

Ostend Fireworks Festival 9 July – 13 August, Ostend Every year, a fireworks festival is organised in Ostend, with fireworks shot from the main beach between the Kursaal and the Venetian Galleries. Eight Belgian fireworks makers compete to win – and this guarantees some sparkling fireworks! www.visitoostende.be

Journey’s End 10 October - 12 November 2018, Ypres This Tony Award-winning play first ran in 1928, starring Laurence Olivier. This autumn, there will be a special performance at Het Kruitmagazijn (Gunpowder Store) in Ypres. In a five-star review, the Telegraph said &quot;this production is worth a trip to Belgium&quot;. www.meshtheatre.com/journeysend Start planning your trip to West Flanders now, at www.visitflanders.com.