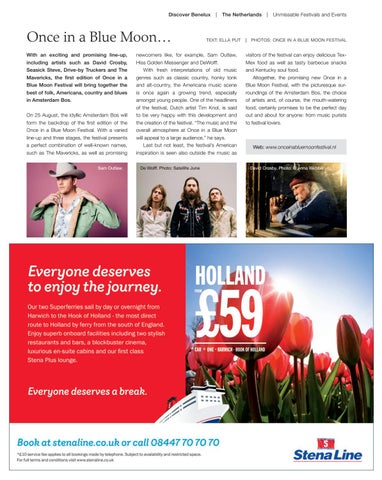 Once in a Blue Moon… With an exciting and promising line-up, including artists such as David Crosby, Seasick Steve, Drive-by Truckers and The Mavericks, the first edition of Once in a Blue Moon Festival will bring together the best of folk, Americana, country and blues in Amsterdam Bos. On 25 August, the idyllic Amsterdam Bos will form the backdrop of the first edition of the Once in a Blue Moon Festival. With a varied line-up and three stages, the festival presents a perfect combination of well-known names, such as The Mavericks, as well as promising Sam Outlaw.

TEXT: ELLA PUT  |  PHOTOS: ONCE IN A BLUE MOON FESTIVAL

newcomers like, for example, Sam Outlaw, Hiss Golden Messenger and DeWolff. With fresh interpretations of old music genres such as classic country, honky tonk and alt-country, the Americana music scene is once again a growing trend, especially amongst young people. One of the headliners of the festival, Dutch artist Tim Knol, is said to be very happy with this development and the creation of the festival. “The music and the overall atmosphere at Once in a Blue Moon will appeal to a large audience,” he says. Last but not least, the festival’s American inspiration is seen also outside the music as De Wolff. Photo: Satellite June

visitors of the festival can enjoy delicious TexMex food as well as tasty barbecue snacks and Kentucky soul food. Altogether, the promising new Once in a Blue Moon Festival, with the picturesque surroundings of the Amsterdam Bos, the choice of artists and, of course, the mouth-watering food, certainly promises to be the perfect day out and about for anyone: from music purists to festival lovers.