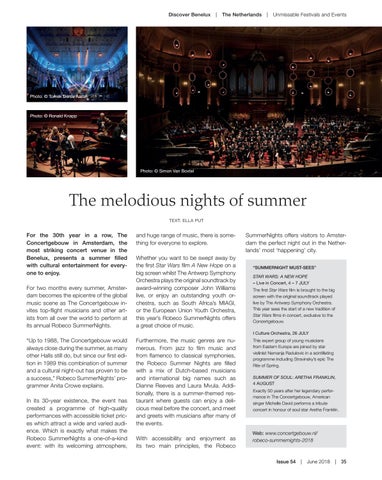 For the 30th year in a row, The Concertgebouw in Amsterdam, the most striking concert venue in the Benelux, presents a summer filled with cultural entertainment for everyone to enjoy. For two months every summer, Amsterdam becomes the epicentre of the global music scene as The Concertgebouw invites top-flight musicians and other artists from all over the world to perform at its annual Robeco SummerNights.

and huge range of music, there is something for everyone to explore. Whether you want to be swept away by the first Star Wars film A New Hope on a big screen whilst The Antwerp Symphony Orchestra plays the original soundtrack by award-winning composer John Williams live, or enjoy an outstanding youth orchestra, such as South Africa’s MIAGI, or the European Union Youth Orchestra, this year’s Robeco SummerNights offers a great choice of music.

SummerNights offers visitors to Amsterdam the perfect night out in the Netherlands’ most ‘happening’ city. “SUMMERNIGHT MUST-SEES” STAR WARS: A NEW HOPE – Live in Concert, 4 – 7 JULY The first Star Wars film is brought to the big screen with the original soundtrack played live by The Antwerp Symphony Orchestra. This year sees the start of a new tradition of Star Wars films in concert, exclusive to the Concertgebouw. I Culture Orchestra, 26 JULY

“Up to 1988, The Concertgebouw would always close during the summer, as many other Halls still do, but since our first edition in 1989 this combination of summer and a cultural night-out has proven to be a success,” Robeco SummerNights’ programmer Anita Crowe explains. In its 30-year existence, the event has created a programme of high-quality performances with accessible ticket prices which attract a wide and varied audience. Which is exactly what makes the Robeco SummerNights a one-of-a-kind event: with its welcoming atmosphere,

Furthermore, the music genres are numerous. From jazz to film music and from flamenco to classical symphonies, the Robeco Summer Nights are filled with a mix of Dutch-based musicians and international big names such as Dianne Reeves and Laura Mvula. Additionally, there is a summer-themed restaurant where guests can enjoy a delicious meal before the concert, and meet and greets with musicians after many of the events. With accessibility and enjoyment as its two main principles, the Robeco

This expert group of young musicians from Eastern Europe are joined by star violinist Nemanja Radulovic in a scintillating programme including Stravinsky’s epic The Rite of Spring. SUMMER OF SOUL: ARETHA FRANKLIN, 4 AUGUST Exactly 50 years after her legendary performance in The Concertgebouw, American singer Michelle David performs a tribute concert in honour of soul star Aretha Franklin.